How much Nuck could Modano chuck if Modano could chuck Nuck?

Share All sharing options for: How much Nuck could Modano chuck if Modano could chuck Nuck? 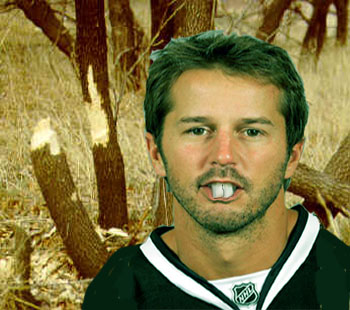 The Stars are broken and scarred, but not beaten. The have key injuries to players like Brenden Morrow, Sergei Zubov, Brad Richards, Jere Lehtinen, Toby Petersen, Mark Parrish and Fabian Brunnstrom.

But hope is on the horizon. From coach Dave Tippett:

"We had a full contingent (of players) today. Brunnstrom and Lehtinen went through a full practice, which was good to see. Both of them are hopefuls for (Tuesday). Richards has a chance at the end of the week possibly.

More on the Stars here.

For our sakes, let's hope those guys sit out a little longer.

Despite the rash of injuries, the Stars are barely clinging to 8th spot in the West and now embark on a critical 3-game road trip starting tonight in Vancouver. There are plenty of Stars who can score in replacement of the injured guys. Remember Louie Eriksson? Yeah, he's the guy that was a thorn in our side when Vancouver lost 2-1 to Dallas in February, with a goal and an assist. Joel Lundqvist scored the winning goal on Jason Labarbera.

The Canucks also lost to the Stars in January, 3-2. That night Mike Modano had 2 points and James Neal had an assist and the shootout winner on who? Jason Labarbera. Oh, the days of Labarbie standing on his head and his team not bailing him out. Remember THE SAVE? Still my fave of the year.

From the Canucks' side: The media was harassing Roberto Luongo about his lack of puck-handlig skills since the Kings game to which Luongo responded:

"All the goalies make mistakes behind the net, even the best ones in the league," Luongo said. "So just because I make mistakes doesn’t mean it has to be amplified and suggested I don’t know how to play the puck."

Whoa, Lou. Lose the ego. The question was a fair one. It's not just the media that is concerned about it. I think Luongo should just stop the puck behind the net and that's it until he hones his puckhandling skills. I don't care how defensive he gets about it. More on that issue at the Vancouver Sun.

Alanah at Canucks and Beyond is taking exception to the Luongo issue, and she has some valid points.

I agree that Luongo has been stellar besides the gaffs with the puck. Hell, look at the save he made on Stastny after the weak Tucker goal. But in my opinion there has been too many "softies" lately. I am happy that the team persists and still wins, but I'd like to see those kind of goals go away. I want this team to be stellar heading towards the playoffs. What if that gaff was in Game 7 of Round 1 of the playoffs? What if we lost a series by one goal because of it? It's relevant. Why? Because we've seen Louie foul up on the final goal of the Ducks series a couple years back (even though we were outmatched.)

Doesn't matter. Right now my heart rate goes up every time he leaves his crease to play the puck. It's fair to say that I am justified in getting these moments of anxiety. I don't mean to piss all over the team's current success. There's always room for improvement is all.

I think tonight's game will come down to (obviously) overall motivation. We know the Stars pretty much have to win to stay above 9th. The Canucks are pushing for a team record home streak and look to stay ahead of Columbus and inch closer to Chicago and Calgary.

I really don't think it's a great idea to be giving Dallas a lot of power plays tonight or we'll most likely lose. I think that if Dallas gets a lead, they will be very effective at keeping it..something the Canucks have been lacking recently, even though they squeak out wins (and give us panic attacks.

Let's see how Brendan Morrison does playing against his former team. Fail, Brendan, fail. You are the enemy now, especially seeing how you may be centering Modano and Lehtinen tonight, according to Defending Big D.