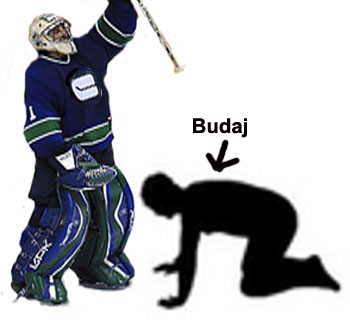 As commentors have pointed out, the Wings have beat the Jackets 4-0, the Islanders have beaten the Blackhawks 4-1, and the Blues are beating the Wild 3-0 towards the end of the 2nd period. C'mon Canucks! Now you can not only put more space between yourselves and 9th, you can also put yourselves within 2 points of the slumping Hawks. Don't be complacent!

Fear is a great motivator. The Canucks don't want to have a repeat of that late season collapse from last year.

"What I take with me from what happened last year is the fear -- I never want to go through something like that again," Roberto Luongo said. "I use it to motivate. I remember the feelings I had once last season was over. I was devastated. It took me a long, long time to get over it.

"I just don't want to go through something like that again."

More on that at the Province.

I should have mentioned this earlier; the Canucks (including tonight) play the Avalanche 4 more times before the season ends. Time to end the losing streak to Colorado.

The Canucks are in good shape to win this one, as they have won 8 straight games at home and the Avalanche are playing their second game in as many nights. They defeated the Oilers 3-2 on Saturday night to tease their fans that they can still make the playoffs, which is next to impossible.

Both losses to the Avalanche this season have come in shootouts. The one game Luongo was gunning for his 4th consecutive shootout but the Avs prevailed 2-1. The last game Milan Hejduk and Paul Stastny had 3 points in regulation, plus Hejduk scored in the shootout. Cory Schneider was in goal for that one. He played well, but was not bailed out by his team. Steve Bernier had 2 goals. He nearly had a hat trick.

So the Canucks will have to come out in a hell of a rage like they did against L.A. last game, score first, and play their system. Do they have it in them? I think so.

The Canucks For Kids telethon will be airing during the game. For more info on how to donate check out CDC.