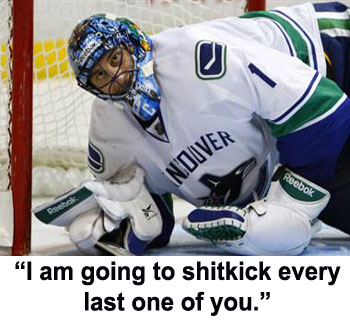 "If you look at the teams we’re going to be playing on our schedule, they’re all fighting for a playoff spot, they’re all the tenth to sixth place teams and they need every point so it’s up to us to make sure we distance ourselves from them," Wellwood said.

In fact, the Canucks play (potentially) 12 of their last 16 games against teams that will/may be fighting for a playoff spot.

(I think I should count out the Coyotes from that mix).

It's not going to be easy. To say that we should be able to beat the teams (handily even) that are not in a playoff spot is absurd, and I've been guilty of thinking that way.  The Ducks and Kings may be 7 and 10 points behind Vancouver at this point. But they have only 2 and 5 less wins than Vancouver. They are 4 and 1 point respectively out of a playoff spot. The parity in the West is sick.

I'm trying to remain positive here. Want more Anthony Robbins bullshit? "Teams go through slumps." It happens. They have their ups and downs. (I'm making myself sick!) This Canucks squad right now is not playing up to its ability. We all know that. Tonight was a better effort, but nowhere close to being what they CAN do. Yet they still lose close games to the Kings and Ducks. By the way, I'll take the 1 point from tonight's loss as it puts the Nucks 7 points up on 9th spot and 3 points up on Columbus. Better than nothing.

Just don't tell Luongo that. After Niedermayer's winning goal in OT Luongo was visibly angry. Well, good. He'll tear them a new asshole tonight. That's why he is the captain.

The sky is not falling. I just want the team to win all the damned time. I want perfection. It makes me happy. Unrealistic, yes.

-Dank and Hank were each a -3. They had a tough night, no doubt.

-I tear into Pavol Demitra any chance I get, but he has been pretty aggressive and effective lately. 2 assists for him tonight.

-I can't tell you how glad I was to see Wellwood finally score a goal. His reactions before/after he knew the puck went in said it all. Good for you, Woody.

-The newest Ducks: Whitney, Christensen and Nokelainen combined for 1 goal and 4 assists.

-Go home and kick the holy hell out of the Kings on Friday to make us forget about this lousy Cali road trip.