Canucks vs Ducks (Uh-oh, not another game against a non-playoff team)

Share All sharing options for: Canucks vs Ducks (Uh-oh, not another game against a non-playoff team) 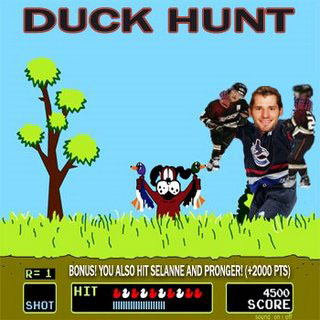 THE ENEMY: Battle of California (Is Sleek back from the Pahlsson Islands yet?) and Girl With A Puck

With the Stars, Wild, Oilers, Predators, Coyotes and Flames all losing last night the Western Conference standings look something like this: 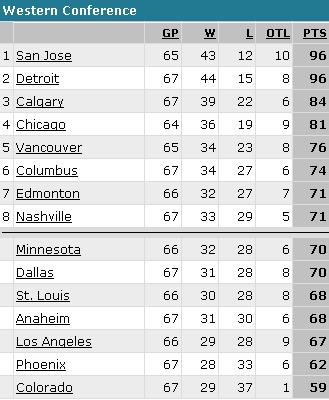 Another fortunate turn of events for a Canucks team that (to our disgust) pissed away 2 points to the Kings a couple of nights ago. The scenario tonight is about the same. The Ducks are chasing a playoff spot and are going to play us hard. Can the Canucks bring a better effort?

I'm not even going to bag on the team anymore. I think Mike and I have done that enough already over the past couple of days. Oh wait, Kyle Wellwood's stats are worth a look..no goals, 2 assists and 24 shots in his last 21 games. Does Woody have any finish left in him?

Keep in mind that Mattias Ohlund only needs 1 more point to break the Canucks' points record by a defenceman.

-The Canucks have scored more goals per game on average than the Ducks.

-The Canucks have allowed fewer goals per game than Anaheim.

-Vancouver is also: better 5 on 5, a fair bit worse on the power play, barely worse at killing penalties, get less shots per game, and, by a slim margin, allow less shots against per game than the Ducks.

- Here's to unemployment! Bernier leads all Canucks (2-2-4) against the Ducksand half of Pyatt's production comes against Pacific division teams.

- Seriously, one day someone is going to rent this for nefarious purposes and the pictures will be gold. Pure gold.

- So Brendan Morrison is going to be killing us this evening (complete with Offspring supporting vocals). Look shocked when it happens.

- Yeah, Friday's game should be fun.

The Ducks have lost 3 games in a row, all by 3-2 scores, to the Wild, Stars and Blackhawks. They have not put together 3 consecutive victories since late November, if you can believe that.

There are some insane individual player stats. Scott Niedermayer is a -15. Little brother Rob is a -17. Chris Pronger an even 0. Getzlaf, Perry and Bobby Ryan are putting up impressive numbers, where Pronger, Scott Needs, and even Selanne are not producing at a normal rate by their standards.

There have been several personnel changes with Brendan Morrison being a failure and sent packing, Chris Kunitz shipped to the Penguins for Ryan Whitney, Sammy Pahlsson (to Earl Sleek's dismay) sent to Chicago for James Wisnewski, etc.

Former Canuck Mike Brown will play for the Ducks tonight. Don't expect any love from the guy.

"That is pretty much my style to go out, play a physical game and bring that energy. If I need to fight, I’ll fight. But otherwise, I’m going to go out there and bang all their good players and make them worried to go back and get the puck. If I can go out there and change the momentum of the game just by a big hit or just playing hard, that is what I’m going to do."

More on Brown and the Ducks' belief in themselves here.