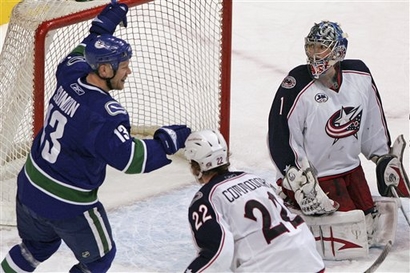 I have been somewhat concerned over the Canucks' overall play over the past few games even though they have been winning. I asked a few questions in the pre game post.

A: The dominant, speedy, complete team effort Canucks that shut down and basically owned a Columbus team that needed that win. The shots were 22-9 after periods in favor of Vancouver, and they were up 2-0. In the end they outshot the Jackets 30-20.

All 4 lines were skating circles around the Jackets, who looked bewildered. Vancouver played pretty damned well defensively too. Notice how well they got the puck out of their zone 5-on-5? They made it look easy most of the night, and their puck possession was key.

That was about as close to a 60 minute effort as you can get. Domination.

Q: Is Mats Sundin going to break out of his goal-scoring slump?

A: Well, Mats didn't score but had 2 assists. I thought he looked solid tonight. As good as he was, I thought Demitra and Kesler looked even better. Those 2 showed a lot of hustle. Demitra had no points but 4 shots. Kesler scored the winning goal and had 6 shots. The RPM line was flying.

Q: Which Canuck (erhmm Wellwood) may be playing in his last game in a Canucks jersey? The Canucks do play on Tuesday night against the Wild-the eve of the trade deadline, however, trades happen several hours before the deadline passes.

A: I thought Wellwood played one of his best games of the season tonight. In his measly 10:39 played he showed a lot of speed and creativity. I think if Ovechkin was Woody's linemate tonight he may have had at least 3 points. There is not a lot of finish in the hands of Pyatt or Bernier.

Oh, and that is the second game in a row where Woody has made a sick defensive play in front of Luongo to save the day in the 3rd period.

Did this effort save Wellwood's chances of sticking with the Canucks? Maybe.

Perhaps it's Taylor Pyatt who needs to go.

Q: Is Luongo back to form? He looked like it against the Lightning. He needs to outplay rookie Mason. Keep growing that hair longer, Louie. It gives you power.

A: It looks like Louie is back to Luongod form. He made some sick saves, like the one posted below by Mike. But the Canucks played superbly in front of him most of the night.

Steve Mason played well, but had no help from his teammates on this night.

The Canucks are now 4 points up on Columbus to secure 5th spot in the West, and 6 points up on 9th spot. That's some breathing room that they have not had in quite a while. Still 8 points behind the Flames, who lost in an 8-6 goal-fest against the Lightning tonight.

PS: Iginla had 5 points in that game. Who else did? Mark "freaking" Recchi. Go get him Gillis!