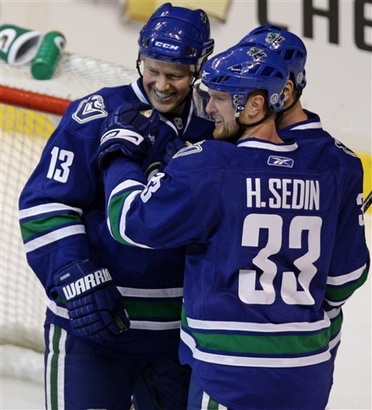 Canucks on crack! It looks like the 3 days off has helped out the Canucks greatly. The came out charging before the Hawks get even get started.

Yes, we do have a new #1 unit in Demitra-Sundin-Kesler. They are looking good again.

The Canucks are barely letting up on the Hawks, who are officially frustrated. Chicago took 5 straight penalties in the middle frame and the Canucks made them pay with PP goals by Dank and Edler.

A late shorthanded breakaway goal by Kris Versteeg may spark the Hawks for period 3. They aren't going to roll over. Joel Quenneville has them locked in their dressing room right now and he's ripping them a new asshole.

Swedish Canucks have 11 points so far. Wow. Demitra has 2 points. Sundin looks like he's back now, as he has 1 goal and 2 assists.

So going into the 3rd, do the Canucks trap it up completely? Or do they continue the pressure?

As expected, the Hawks came out charging in the 3rd and managed 2 goals, as Vancouver's discipline faltered early on. But when Kesler scored at 13:09 the nail was firmly pounded into the coffin.

7-3 Canucks! This is the first time in 12 games that the Hawks have lost to a Canadian team. Glad we could be of service.

Check out some Canucks stats:

Bernier: 1 goal and 8 shots! Good to see Bernier step it up.

Hell, I can't think of one Canuck that didn't step it up. Even Kevin Bieksa was terrific in his own zone. He was physical and smart with the puck.

Luongo said post game that he is not playing to 100% yet. Just imagine when he does!

This is the first time the Canucks have 2 straight since December 17 I believe. The team looks confident and aggressive. They are playing Alain Vigneault's system, which should mostly eliminate any "Fire AV" banter. I was never down with that anyway. I didn't see the players tuning out their coach in most of the losses.

The emergence of Sundin-Demitra-Kesler is proving deadly. The Sedins are not going to be shadowed anymore and will have more room out there.

Speaking of negative banter: Great to see Mats Sundin playing so well now. He's making great plays, he laughing and smiling out there. I don't think people should be calling him an over-aged bald Messier anymore. ]

Ryan Kesler is just insane. Good to see him thrive in a scoring role. I think I was kind of prophetic about this... At least, I was hoping to see it happen.
BOXSCORE AND HIGHLIGHTS

What is the biggest reason for the Canucks turnaround?