Time For A Misconduct Or Two

Share All sharing options for: Time For A Misconduct Or Two 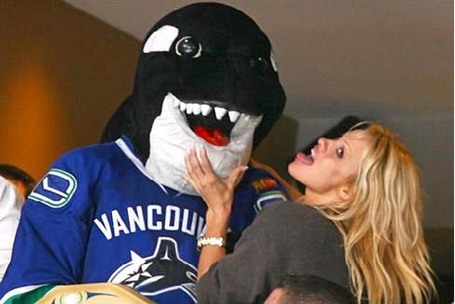 Pam Anderson's tongue and our mascot welcome you.

Your surly hosts - Mike & Sean - are happy to give a voice to the Vancouver Canucks alongside quite a killer group of hockey minds here at SBN. And a big thanks goes out to master and commander Mirtle (who, come hell or high water, we'll make a Canucks fan if it kills us).

First, a little about us...

I knew nothing about hockey - other then "that Islanders team won something or other" - for much of my life until 1994. While the whole NYC area was caught up with the Rangers run at the Cup, I took casual notice and, like much of what I set out to do, things went terribly awry and I became a diehard fan of the Vancouver Canucks.

I slammed the words "Yankee" and "Canuck" together three years ago and have been writing for them at Yankeecanuck.com and at canucks.com since.

I've never even been to Vancouver and am waiting for some playoff promise to do so (cue the joke right...about...here). In the meantime I’m an East Coast lad in another country rooting like a frothing madman for the West Coast team of another country to excel in a sport I can barely play in hopes that we can all collectively celebrate watching a bunch of guys younger than I am drink beer from an old, silver chalice.

I live in Smithers, a great town in northwestern B.C. I have been a hockey junkie since 1977, following both the Leafs (yeah, shoot me) and the Canucks. I have been writing about the Canucks since June 2006 and am obsessed with it.

I am a crass and brutally honest person by nature and I think that translates into my writing. I am passionate about this sport and also this Canucks team that just can't seem to get a grasp on what it takes to win a Stanley Cup. Yet I remain positive and endure the ups and downs of the team.

Entering the Sports Blog Nation, I do not intend to change my style. It will remain the same as it did on my former site, Waiting For Stanley.  I will probe all media outlets and bring Canucks news to you here at Nucks Misconduct in hopes of making this the most informative Canucks news source, along with opinions to go with it.

Oh yeah, and I love doing mock Photoshop images to express a point!

The title of Nucks Misconduct? It accurately describes how we cover our team. We may not always see eye to eye (just say the words "Alain Vigneault" and watch what happens) but, good or bad, we'll cover everything in the Canucks world with the requisite amount of cursing, faux-scientific analysis and alcohol-infused rants you'd expect from watching a team working on four decades of a Cup drought.

Two things that are different (and very cool) about Nucks Misconduct:

1. Fanposts: Think of them as comments on crack. If you have something to say, Fanposts allows you to scream it. Sound off on Gillis, Sundin, Fin, whatever. If it's really good we'll put it front and center on the homepage for everyone to comment on. It's all yours.

2. Fanshots: If you want to highlight anything in the world of Vancouver hockey (stories, images, video, Swedish women, whatever) you can do it in a fanpost. Just like Fanposts, it's all yours.

There's a lot here and we're still learning. If you'd like to learn more, the official SBN guide has you covered.

In the meantime, we look forward to bashing skulls with our other Northwest brothers, engaging in a civilized discussion about Fredo with PPP and regret absolutely none of the bad words that will be on display over time about the Dion Phaneufs, Cal Clutterbucks and Zach Stortini's of the world. They're all simply terrible. Just awful.