Share All sharing options for: Canucks edge the Lightning 2-1 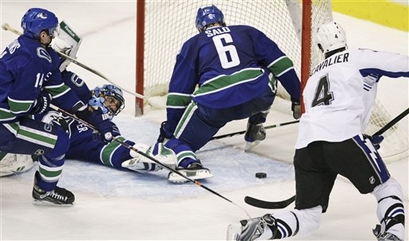 - This Canucks team once again did not play a superb game yet still got the win. Their defensive play was somewhat stellar, minus the first period, where Luongo shut the door.

-The rest of the way, the Canucks got a lucky goal from Steve Bernier (thanks, Vinny) to make the game 2-1 and held on from there. They really shut the door and played solid defensively after the first period.

- The team didn't "buckle down". They didn't play desperately, or it would have been 5-1 (as an example)

- The RPM line is still dead to me. Sundin....where the hell are you? Stop passing and SHOOT more...especially on the power play.

- The Sedins-Burrows line had plenty of chances but did not capitalize.

- What was the last time you saw Roberto Luongo play a stellar game without letting in a questionable goal? Tonight he was terrific.

-There were 2 key defensive plays: Salo's heroics to keep the puck out of our net at the end of the 3rd period and Wellwood's beauty sweep check as (I believe Stamkos) was charging at the net alone.

-I thought Kari Ramo would shit the bed. But he challenged himself after last game and really played well in goal for the Lightning tonight.

-Pretty boring game otherwise, huh? I like the Western Conference standings after tonight's win though.

-Believe in Mark Recchi. He should be a Canuck. Gillis..go and get him. You won't regret it. The guy has wheels, a great shot, plus he can do the dirty work in front of the net. He is the missing piece on our 3rd line.

-"As a team we weren't where we wanted to be after 40 minutes but we came out and had a good third period and found a way to win," Luongo said. "I don t know if it was coming back from a long road trip or what, but it took us a little while to get our legs. But we found a way to win and that s what counts at the end of the day."

That's 3 shitty games played in a row yet Vancouver has won 2 of 3 games. I was expecting a better effort tonight, but it didn't happen.  But as the captain said "we found a way to win and that's what counts."