Canucks' "Unemployment Line" living up to its name

Share All sharing options for: Canucks' "Unemployment Line" living up to its name 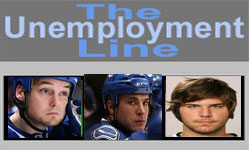 That is why our friend GZ Expat dubbed the line of Pyatt, Bernier and Wellwood just that recently. Don't get me wrong, I'm not thinking the sky is falling after a Canucks loss. I'm thinking long term here. I'm thinking playoff success. The Canucks are going to need a little extra scoring punch beyond the Sedin and RPM line on occasion to have prolonged success in the playoffs (or to make the playoffs for starters).

Here are the stats (and my gripes) on Line 3 right now:

OK, I stood up for the guy when he was first acquired by Mike Gillis, but my patience with him is wearing thin. We can't accept that his 14 goals and 21 points is acceptable anymore. Not when 11 of those goals came in his first 21 games. Those good old times ended on December 4. Yeah, way back then.

In his last 25 games, Woody has 2 goals and 2 assists. He has only 30 shots in that span. Wellwood has been given plenty of opportunities a) on the top power play line with the Sedins or b) on a top 6 scoring line.

Pyatt has 7 goals and 14 points in 51 games this season, so you know he has had several droughts this season. Sure, we love his physical game and the ladies love his rugged good looks, but when do we draw the line with this guy? He is pointless in his last 5 games. He has 1 goal and 1 assist in his last 12 games. He has only 30 shots on goal in his last 25 games. He has also been given plenty of time with the Sedins or in the top 6.

I can't watch this guy flub a shot in a scoring position for much longer.

Bernier has fared a tad better than his two linemates. He has 12 goals and 27 points in 58 games. I think we've been waiting for Bernier to break out all season long, but right when we think he's going to do just that to show his potential...he disappears for several games at a time.

In his last 18 games, Bernier has scored only 3 goals and 5 points.  He has 1 goal and 2 assists in his last 13 games played. Bernier shoots the puck more than Pyatt and Woody (46 shots in his last 25 games) but doesn't get many results.

I know Mike Gillis doesn't want to disrupt the locker room or mess with a winning combination come trade deadline, but something has to be done about this trio of futility, especially if we can assume that the top 2 lines stay intact.

The Canucks need something more from these guys. I think the majority of people might blame Wellwood for the line's slump. But I'm not so sure you can pin it on one guy. But hell, this may as well be the 4th line!

Something's got to give. How about we send all 3 to Manitoba (I know, that's not technically possible-I'm dreaming). Yeah, and lets call up Jason Krog, Jason Jaffray and Michel Ouellet. We'll slot them right into line 3.