Canucks get beaten by Halak...and themselves

Share All sharing options for: Canucks get beaten by Halak...and themselves 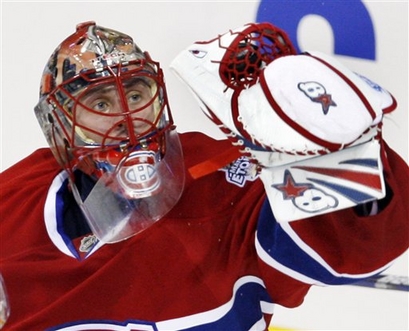 The Canucks outshot the Canadiens 34-17, but scored no goals. A lot of credit goes to Jaroslav Halak for the Habs' win, obviously. But the Canucks cannot use that as an excuse for the loss.

-Vancouver went 0-for-5 on the powerplay. They completely blew a full two minute 5 on 3. For most of the first two periods, they were guilty of being a little too fancy I thought. They didn't get down and dirty to bury their chances. Some of their plays looked painfully predictable. Halak was having a seemingly easy time reading the plays.

-Kyle Wellwood coughed the puck up at the end of a Canucks powerplay in the first period and the puck was fed to Tomas Plekanec for the breakaway just as he stepped out of the box. 1-0 Habs.

- Vancouver may have outshot Montreal 13-7 in the second period, but Alex Burrows took a costly and nasty crosschecking major, making Patrice Brisebois bleed. That would put the Canucks behind a man for 5 minutes, and cost the team it's hottest player for the remainder of the game. Andrei Markov pinched in and made the Canucks pay about halfway through that penalty, making it 2-0 Habs.

-That was about the time the Canucks smartened up. They got less fancy and started putting more shots on net from the point with a screen in front. Halak wasn't biting though. He fought his way through traffic and made some tremendous stops in Period 3, solidifying his position as the number one goalie in Montreal...for now.

In my opinion, I didn't think they played all that hot (or consistent enough) tonight or against the Leafs on Saturday.

-The RPM Line is far from firing on all cylinders. They had a combined 7 shots on net tonight and all 3 were minus players.

-Would have been convenient to have Burrows play the whole game with the Twins. And to think that he had a lot of friends at the game watching.

-No faulting Roberto Luongo tonight. He looked good again. The 2 goals he surrendered were not his fault.

-Not the worst game by the Canucks' defence. It was the forwards who really didn't get the job done. I thought Mason Raymond looked impressive in his 9:02 played.

-7 power play opportunities for Montreal. Yet they were outshot by a 2-to-1 margin. That's why I thought the Canucks' D weren't all that bad.

-Montreal really had to win this game to change their fortunes. The Canucks can go home with their heads held high, as they win 3 of 4 games on their road trip and are now 8-2 in their last 10.

-Andrei Markov: Sneaky little bugger likes to sneak in from the point. He played over 26:00, scored a goal, and had 3 shots. He leads his team in scoring. That says a lot about him, and not much about Montreal's forwards.

More from Jason Botchford at The Province.