Can the Canucks make life worse for the Canadiens? Pregame and Game Thread

Share All sharing options for: Can the Canucks make life worse for the Canadiens? Pregame and Game Thread 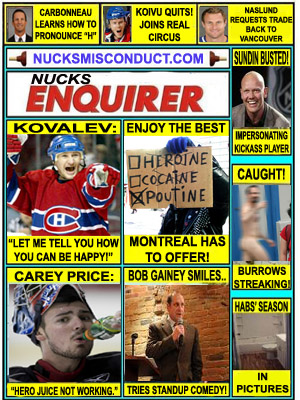 2:40 PM ET Update: We forgot to mention tonight is also a homecoming for Bernier and Bolduc, both from Quebec. In honor of the event, expect Bolduc to challenge Laraque and Bernier to miss an open net no less than 10 times before Vigneault buries his foot in his ass.

Game Stats Update (via canucks.com)
- The Canadiens are 8-4-1 against the West this season

- This is the 112th meeting between the two teams with Montreal the holding a strong historical edge at 27-71-13.

- Look for Burrows and Luongo to put on a show in front of their home city.

- As Sean noted below, look for Alex Kovalev to remain relevant for a second straight game.

- For notes from the other end, visit Eyes On The Prize. If you feel brave, try Habs Inside/Out too.

Montreal's centennial season is turning into a bit of a gongshow.

- The complete meltdown of Carey Price as a starting goalie, and the general lack of success of both he and Jaroslav Halak. It appears Halak will start against the Canucks, as Guy Carbonneau said today that he will go with the goalie that gets wins or has the "hot hands".

- Alex Kovalev has mental issues and is sent home from a road trip by Bob Gainey. This story has a happy ending for now, as Kovalev has said that the break did him a world of good. Well, he did get 3 points in his first game back in a Habs win over the Senators on Saturday. He may be a major force against the Canucks.

- Ah, and then the Kostitsyn Brothers and Roman Hamrlik are reportedly linked to a druggie/crime suspect. I don't even know what is happening with that scenario except that the League and Bob Gainey are "dealing with it".

So many distractions for a Canadiens team that doesn't need distractions. They are sliding down the Eastern Conference standings, once at/near the top, now in 5th spot, only 2 points up on 9th place Carolina.

Saku Koivu missed practice on Monday due to the flu.

No Francis Bouillion, who has a groin injury.

Oh yes, the Habs did acquire Mathieu Schneider since we played them last.

The Canucks are the exact opposite.

-Luongo is looking like his normal self again (just close your damned 5-hole at key times in the game, Louie! Jeezus!)

-They've won 8 of 9 games in a masterful month of February.

-These times are gold, and you can see it in the players' faces, here and here.

It couldn't be better timing for Francophone Alex Burrows to stroll into Montreal, with a rumored 70 friends in attendance. He has 7 points in his last 4 games, and Vigneault is looking like a genius for putting him with the Sedins. (admit it, Yankee!)

It's another early game: 4:30 PST, and it's on Sportsnet Pacific.

It's tough to bet against the Canucks lately isn't it? They had better play a more sound game than they did in Toronto. Maybe Sundin is over his illness and can play better as well. A shootout winning goal against your former team doesn't get you off the hook does it?