Canucks/Leafs: Ever Seen A Swede Cry?

Share All sharing options for: Canucks/Leafs: Ever Seen A Swede Cry? 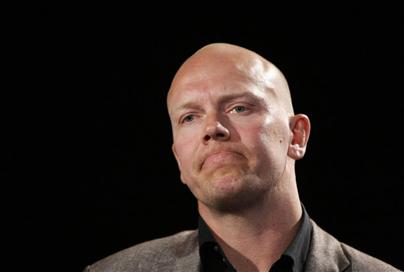 Could it be? Is it finally here?

We're going to revel in the joy tonight with our friends over at Pension Plan Puppets. The rules are familiar: The first period will be in our house, the second over in their Forest Hill mansion and then the third will be under a bar stool or, you know, wherever. Please welcome our friends with open, loving hippy arms.

And making matters worse, I understand this is some sort of big deal for #13.

Before we get to that, there's still two points up for grabs the good guys need. The Canucks need to break away from Columbus who they are tied with at 66 points (and who just won in the SO against the Leafs a few nights ago). The Blue Jackets take on the Ducks today while Edmonton plays Calgary and Dallas is up against Chicago.

Vancouver will be aiming their good intentions tonight at Vesa Toskala who has a mindfuckingly bad .883 save percentage. He and Cujo only stopped 11 shots on net the last time these two teams met. Luke Schenn and Iam White anchor the Leafs defense that is missing Tomas Kaberle & Mike Van Ryn. Up front, the Leafs leading scorer Jason Blake is on a bit of a streak with points in six straight. Dominic Moore (yes THAT family) leads the team in assists.

And...deep breath...then there's Sundin. If you need a mainstream fix (you junkies) go here, here, here and here. Same old stuff: Toronto is home, he's not a traitor, he enjoys his new role on the Canucks, blah blah blah.

Sean put his thoughts in a fan post over at PPP. For me, I can understand every ounce of venom that goes Sundin's way tonight and if I was a Leafs fan I'd be no different. Hell Naslund is dead to me as long as he wears Ranger blue and he doesn't have the stats or pedigree that Sundin has on top of the fact he left as a free agent. Like a good Yank, I am quick to anger.

No matter what he tells himself, Sundin is a rental player. But while not a fan of that mentality, I have begrudgingly learned to accept that he's at least our rental. He's not scoring like he should, but he has helped free the Sedins and, better still, has transformed Kesler's play which no one saw coming. If he keeps doing that and stays out of the damn box, who knows maybe he'll grow to even become tolerable!

But he's a Leaf for life and we all know it. Vancouver's stop is a small asterisk in his record book. So be it.

- It's a reunion with old buddies Burke and Nonis. For what it's worth, Nonis still likes us.

- If you believe the rumors, it's possible Burke will be looking at the twins he drafted while Gillis may be sizing up Antropov because, you know, we don't have enough former Leafs on the team.

- Alex Bolduc steps in tonight for the injured Hansen and/or the Blackout who is at home with Baby Blackout.

- Vancouver is 4-2-2 when playing on Hockey Day in Canada.

- The Leafs are 13-0-7 this season when leading after two periods.

- With a win tonight, Luongo will have a career best eighth consecutive win and a career-high ninth consecutive game without a regulation loss.

- This is the 128th meeting between the the two teams with Vancouver holding a slim series lead at 53-50-24.