Lazy With The Lead: Canucks/Senators Recap

Share All sharing options for: Lazy With The Lead: Canucks/Senators Recap 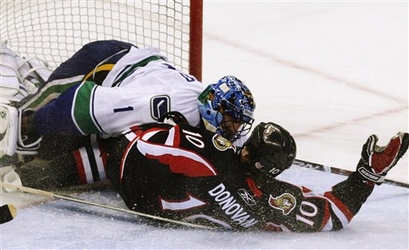 1. You're damned impressed this team was up 4-0 by early in the second. You were amazed at the new Sedin line's production (four points for Hank, three for Burrows and two for Danny). You were psyched Burrows tied his career best in points with 31. You enjoyed seeing Bieksa take more blasts from the point; his first period goal giving him 33 points on the year, good enough to move into a tie for 16th in the league with Weber and Phanuef for points by a defenseman.

2. You were curious where the hell the entire roster - except Luongo again - went once the second period was half over. The Senators managed to find their backbone and outplayed, outhit and outhustled anything in a white jersey. That, of course, leads to bad penalties by the usual suspects (A Sedin hooking call, a Sundin boarding call and O'Brien with an unsportsmanlike) and an Ottawa power play goal. The third period was more of the same with Luongo again standing tall in net to keep this team's winning streak alive.

I fall into both camps (obviously). The Canucks had a beautiful start to the game, simply dominating the play and used their transition game against the weaker Sens, frequently pinning them down in their own end for long stretches. The second part of the game was almost the exact opposite. Disconcerting to say the least, but these guys are playing such good hockey I think we can give them a pass if they got lazy with the lead.

There still are some games going on, so we don't know where Vancouver will be in the standings come the morning...wait, the Leafs couldn't beat a team from Ohio. Pathetic...so the Jackets stay lock step with the Canucks for another night. Better start rooting for the Wild so the Flames stay only six in front of Vancouver by the break of dawn.

In the meantime the Canucks have 66 points, seven wins in their last eight games and, from what I understand, some sort of over-hyped media wet dream off a game on Saturday. More on our festivitites for that in a bit.

For now? Tip those cocktails back and raise what's left in the glass (Flogging Molly anyone?) for another Vancouver win.

(Odd to think this is the same team that could't get a break in nine losses last month.)