Share All sharing options for: Fighting With The Neighbors, Part II: Canucks/Senators

1:50 PM ET Update: The opposition just got a bit easier as Alfredsson is out tonight and then some with a broken jaw. 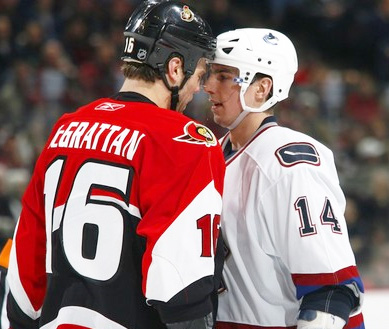 While discussing what color roses to shower Sundin with on Saturday, PPP from Pension Plan Puppets reminded us to not forget about hating the Canadians and Senators as well (I also implore you to find room deep in your cerebrum for desiring the worst for Edmonton and Calgary too).

So while focusing pure concentrated negativity towards the Habs seems akin to clubbing a baby seal that is smiling at you, I do believe we should take his advice on hating the Senators, if for at least an evening.

Why's that you ask? Let's start with interim head coach Cory Clouston guiding his guys to a 5-1-2 record since Craig Hartsburg got the papers some of us feel Vigneault needed back in January. This streak has these poor souls believing they can storm back and make up for being 13 points out of the 8th slot in the East and use Vancouver as a stepping stone to get there.

I know, the nerve right? First off they should be focused on tanking 13 points to catch the Islanders and make a run at Tavares. Secondly - like the Flames and Oilers before them - they already had their shot at the Cup this decade and couldn't beat Gordon Bombay. So don't be greedy, please go to the end of the line and wait while someone else (cough cough) get's a shot at returning the Cup to Canada thank you.

- The Blue Jackets hung on to beat the Blues last night, so they are tied with Vancouver's 64 points. The Kings did us a favor and beat the Ducks, so Anaheim remains three points back.

- Lots of points up for grabs tonight: Blue Jackets take on the Leafs, Dallas takes on Edmonton and the Flames meet up with the Wild.

- In part two of the "Hey isn't that the guy we traded for Luongo?" tour we get a look at Alex Auld tonight. Poor Auld has bounced around a bit since being banished to Flordia in 2006 and has had his ups and downs with Ottawa already this season, but in February has only allowed five goals in four appearances and pitched a shutout against Nashville on Monday night.

- Remember Ryan Shannon? The bloke scored twice (his only two goals of the year in fact) against Colorado on Tuesday night and should be expected to start against his old club tonight.

- More old faces in new places: Ruutu! I do love getting to see him every chance I can. Let's just hope he doesn't steal from the Matt Cooke "Fuck you Vancouver" playbook because that was the same game Luongo went down with the groin injury.

- Ottawa is being tight lipped on the status of their captain who took a deflection off the face and quite possibly has a broken jaw.

- Check out Scarlett Ice for more.

- Kesler man crush update: he has 13 points (9G, 4A) in eight games since being bumped up to right wing on Sundin's line. His two goals against Calgary brought him to 38 points, a career best.

- Burrows man crush update: With three assists in two games, the new third Sedin brother is three points away from tying his career best of 31 points. His 13 goals this year is already a career best.

- This will probably be a nice warm up for the booing Sundin should expect all weekend long because, if you check the chrome Krona's career stats against Ottawa he's made them his bitch: 69 games, 24 goals, 39 assists.

- For those keeping score at home we have the Sedin line, the RPM line and now - thanks to GZ Expat's fanpost - the unemployment line.

- It sounds like Gillis has his hands full with inking the Sedins longterm; rumor has it they want about $6.5 million a season and the Canucks are offering about a million less than that. Read on for more about managements options, including who they can target if the Sedins walk (Does a single Hossa replace two Sedins? Discuss).

Fun with numbers (via canucks.com game notes)
- The Senators are 19-9-5 when scoring first, but 3-17-3 when the opponent scores first.

- The Canucks are 17-0-3 when leading after two periods, and improved to 4-16-1 when behind after two after the win in Calgary.