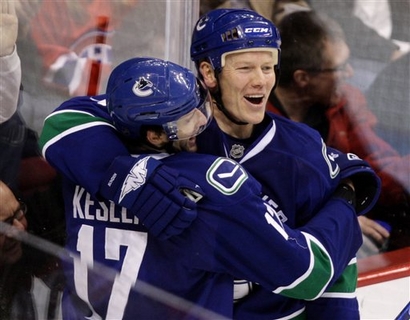 To toss out a cliche, the Canucks played nearly a full 60 minutes tonight, taking NO penalties, outshooting the Habs 29-15 after 2 periods and 37-24 overall to win a crucial game that now puts them in 5th place in the West....barely.

The Canadiens tried to put up a fight in the 3rd period but it wasn't much, as Luongo stopped them cold in their tracks, plus Sundin fed Kesler a beauty pass for an easy goal to make it 4-1. The Habs tried to open it up against the Canucks but now regret doing just that. I can't even count how many odd-man rushes the Canucks had all night.

So, myself and GZ Expat threw out the question today about who should play with the Sedins, as we are tired of the rotating door there. Yet, the Sedins and Burrows had a terrific night, combining for 6 points while the RPM line failed to really show up until the 3rd period. Burrows and the Sedins were great on the rush tonight.

Alain Vigneault mentioned that he used all 4 lines a lot more in this game, as you can see in the minutes played in the "Boxscore" link below. It shows that Sundin played 15:37, for example. Hey Alain..whatever works.

It looked like Montreal was out of gas by the 3rd period. Sure they had some great chances, but the Canucks kept them contained and the chances were not all that overly significant.

A convincing win by a Canucks team that really needed the win. The Habs' lousy losing streak to the Canucks over the past decade remains. They will soon get a chance to redeem themselves in Montreal, as the Canucks will now hit the road for a Habs-like trip that will test their resolve.