This will be the first time the Canadiens and Canucks have faced eachother since Jan. 16, 2007, when Vancouver won 4-0 in Montreal.

-It appears Jaroslav Halak will start for the Canadiens, as he played superb in a 4-2 win over the Avalanche on Friday, stopping 46 shots. Carey Price is in trouble. He has a 2-7-0 record and a 3.87 GAA in his last 10 games. You could almost argue that Carey Price should start this game because he is a BC boy, born in an area near Williams Lake. It might help his confidence to play in his home province.

- From Jason Botchford at The Province today:

"It sucks but I don't deserve [to start]," Price said bluntly. Jaroslav Halak "is playing well, so he deserves the start. It's not fun to sit on the bench but sometimes you need to."

It's not an easy pill to swallow. Price, who grew up in the Williams Lake area, is in his home province. "Pretty much" his whole family is coming to a game in which they may only see the back of his head.

- Alexei Kovalev has 1 goal and 5 assists in those 12 games. There is some serious heat on Kovalev to the point of him being on the trading block.

- No Tomas Plekanec. He will the 2nd game of his 2 game suspension for slew-footing Oilers' Dennis Grebeshkov earlier in the week.

- For any Canadiens updates check out Habs Inside/Out

-Many Canucks fans were so impressed with Jason Labarbera's play against Dallas that they want him to play against Montreal as well. Obviously that won't happen. I wonder if Luongo can sharpen his game playing against a team from his home province. It just may help.

-I heard a rumor that Mats Sundin was sick for the Dallas game. I didn't see his nose running, but he looked slow and tired at times. The RPM line must have continued success in these crucial times in the tight Western Conference race.

VISUAL DIARRHEA
Prepare to put the palm of your hand to your face and shake your head in disgust. Below is a comparison of where the Canucks were in the Western Conference standings last year on February 10 to where they are as of tonight. 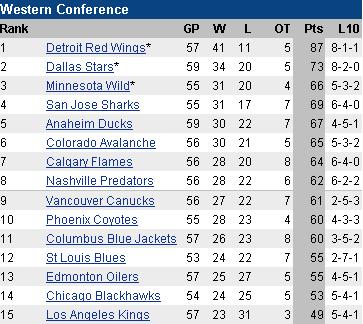 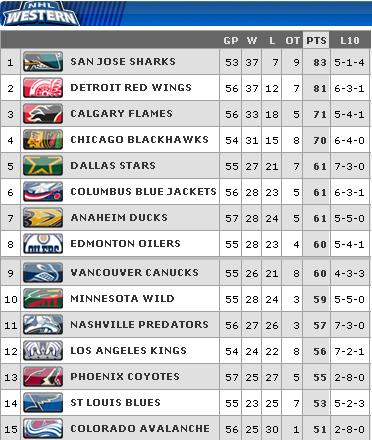 The race is even closer this year. Good times! (Or is it?)

-More of a stat or 2 from Canucks.com:

20 - Wins for the Canadiens this season when leading after two periods (20-1-1). They are just 6-18-1 when trailing heading into the third period.

As Jason Botchford writes: The Habs have not beaten the Canucks for over a decade.

How much longer should Alain Vigneault give Alex Burrows a chance on the Sedins line?