Share All sharing options for: Stars edge Canucks 2-1 as goalies steal the show 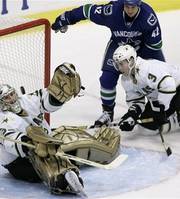 This game had all the feel of the Round 1 series between the 2 teams in 2007. For one, it was a 2-1 final. Secondly, it was all about the goaltending, and wow were Turco and Labarbera superb. Thirdly, it was an intense and physical contest.

The Canucks couldn't come back in this one. The Stars scored the second and winning goal on a bit of a broken play, with Joel Lundqvist scoring a perfect shot over Barbie at 16:27 of the second period. The Canucks started fighting back right away, but were either thwarted by Marty Turco, hitting the post, or missing the net.

Wellwood was everywhere, playing his heart out, but just couldn't capitalize on any of his 6 shots on goal. The Sedins and Burrows showed a lot tonight as well, but generated nothing.

The RPM line, on Sundin's birthday, only showed a few moments of brilliance, but finished the night with a combined 1 shot and no points.

Even though the Canucks outshot the Stars in the 3rd period 13-9 and tried with almost all of their might, they just didn't have enough gas left in the tank. That must have been how Phoenix felt last night when we beat them.

Jason Labarbera is my hero after tonight. What a hell of a game by him. Is there a highlight reel of his saves? Holy hell. That save on Modano where he kicked his leg up was just sick. I wish we could have won that one for him.

A big thumbs down to the ice in Dallas. Brutal.