Canucks persevere and beat the Blues 6-4

Share All sharing options for: Canucks persevere and beat the Blues 6-4 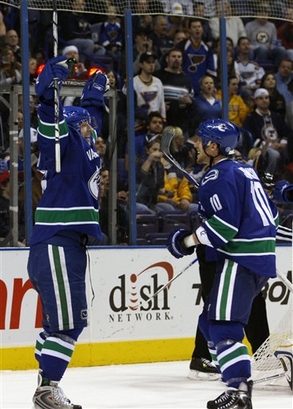 It was 2-0 Blues and you wrote the Canucks off didn't you? Shame!  What we've got here is a Canucks team that is playing as a unit and refuses to give up. Even when it was 2-0 Blues after 1 period they didn't quit. When it was 3-2 Blues after 2 periods maybe you thought Vancouver was done like dinner. St. Louis' record showed that they were nearly unbeatable when both scoring the first goal of the game and leading after 2 periods.

But this Canucks team outshot the Blues 11-6 in the 3rd period and outscored them 4-1 in that frame to take this match 6-4 in an ever so crucial game tonight.

Do you still think Mats Sudin is too old? Well cut it out. He scored twice and was the game's first star.

Does the Canucks' PK still need some work? Yes it does. Is Luongo playing at a All Star level? No.  However...

To stall a red-hot Blues team in their own damned rink was a daunting task. But they did it. And now you must realize that this team is for real. They believe in eachother and they believe in Alain Vigneault's system. End of story.

It was a great time sharing this experience with Blues fans at St. Louis Game Time. While they are licking their wounds and securing a spot in the Western Conference basement, the Canucks are keeping a playoff spot and now are in 7th.

Mean and cruel, yes. But Blues fans have to be god-damned pissed after this one.