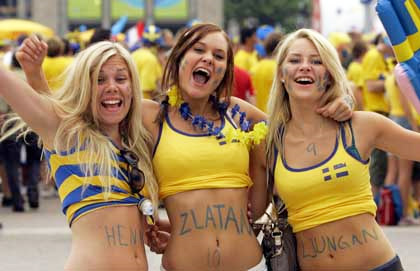 I see our guests are arriving early, so let's get this started.

Like hearing a Coldplay song and not having a gun nearby to blow your head off, tonight's game brings the melodic intrusion of the last place St. Louis Blues.

True, we're not that far ahead of them, thanks mostly to the patented Vigneault "Nothing's Wrong Here" losing streak (soon to be trademarked) from last month. We'll boldly strive to forget that when this team starts pounding away on the beatable which can begin this evening.

With Legace banished to the minors, Vancouver will be aiming at Chris Mason who sports a 0-2-1 career record against the Canucks with a 3.02 GAA. He'll be up against not just the Sedins, but the second line of Demitra/Sundin/Kesler who have 15 points in two games played.

Luongo will have his own Swede to deal with in Patrik Berglund. The rookie has 32 points so far (ahem, that is more than free agent pick ups Demitra and Bernier) and joins an annoying but solid group of forwards including Brad Boyes, David Perron, Gillis love-child David Backes and the freakish neck'd Andy McDonald who could rejoin the team tonight after close to 40 games on the IR with a swollen labia.

While I'm thankful over the years that the Blues have given us Ronning, Geoff Courtnall and allowed Jackman to be Bertuzzi's bitch, is it petty that I'm still pissed about useless Eric Weinrich and his yellow visor coming our way three years ago? What is it about players far beyond their prime making Vancouver a retirement gesture? That's Florida damn it!

Whatever, time to stomp this team down to the bottom of the standings where they belong so they can put aside this playoff talk and get to the real work of finding another team to pry a first rounder out of for Tkachuk (hint: The NY Rangers).

A gentle reminder: we're having the St. Louis Game Time crew over for tea in the first period. At the drop of the puck in the second, we'll jump on over to their house and continue the festive banter there.

Leave it all in the comments ladies and gents; the fight is on, the booze is cold and - good news - I found the gun so we're Coldplay free for another evening.