Why Don't You Have A Seat Over There? Canucks & Predators

Share All sharing options for: Why Don't You Have A Seat Over There? Canucks & Predators 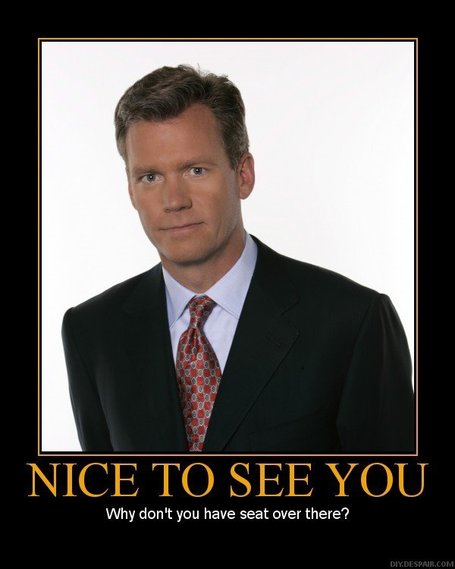 Just about a year ago - when, just like now, Vancouver was trying to keep their heads above water - you may remember a certain game between these two teams. Mr. Everything stood out just a bit:

The Canucks would go on to win this game 3-1 with Burr adding an empty-netter. Fast forward a year later and Mr. Burrows has scored four in his last seven (currently on a three-game goal streak) as he tries to recapture his glory from last year. Look for him to be one of the main guys out there, chucking pucks at Rinne or chucking his body at anything in gold and black. And look for a strong response after their lackluster showing in Carolina three days ago.

With Nashville just two points up on Vancouver, there's no better time to catch a predator. Though perhaps we can do it without the strange chat logs?

Here's your game thread. What is going on in your mind?