Share All sharing options for: Introducing Your New-found Road Warriors: The Vancouver Canucks 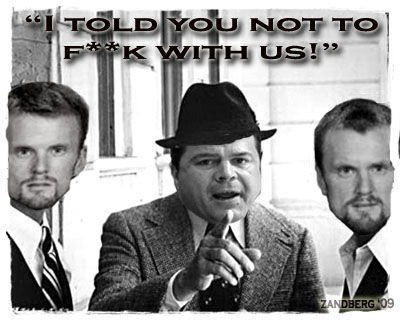 Wow. That is nearly all I can say about this Canucks team. They defied the odds against a well-rested Flyers squad tonight and soundly beat them 3-0 in their own harsh building, leaving Philly with a chorus of boo's as they left the ice. I thought the Canucks looked somewhat sluggish after the first period, but they seemed to gain momentum as the game went on. That was not exactly indicative of a team who was playing the 2nd game in as many nights on the road. Vancouver killed more penalties than the Flyers did, and in the end scored NO powerplay goals but bettered the Flyers 5 on 5 to take this one.

The Flyers are a struggling team that isn't getting any breaks. Hell, how many times did they hit the post or not convert on one-timers in this game? Too many to count. In the end, the Canucks got the game-winning goal from an unlikely source: Willie Mitchell. "Kind of get scared when he wanders off near the other team's net," Canucks goaltender Roberto Luongo said with a laugh. "You never know what could happen."

No shit. Luongo was solid in net but the Canucks limited the quality scoring chances against. Where they faltered, Lou was there to stone a helpless Flyers team.

Jannik Hansen was promoted to the second line, while Mikael Samuelsson was demoted to the 3rd line to start the game but did not produce. That is unfortunate.

In consecutive nights, the Canucks made the highly touted (or, currently hot goalie) look human. Brian Boucher allowed 3 goals for the first time since October 25th.

The Canucks' top line of Burrows and the Twins combined for 1 goal and 3 assists. So, it really is good having Dank back in the lineup. Burrows is lighting it up since his return no doubt.

Don't look now! The Canucks have won 5 of their last 7 games, including 3 straight wins on the road. I believe they are now 6-8 over all on the road. It just keeps getting better and better. Look at the Western Conference standings. Woo!

OK, Canucks fans...are you stoked yet? I have a few questions for you:

- would you leave the current forward lines intact as they are? Does Hansen get another chance on line 2?

- how do you rate Shane O'Brien's play over the last 2 games? Has he earned another game in a Canucks uni over Mathieu Schneider?

- Raycroft is probably going to play against the Canes on Saturday. How much faith do you have in him and the teams' ability to play in front of him?

- YES I AM STOKED. I would leave the current forward lines as is. Shane OB has looked just fine to me. I would leave him in the lineup and old man Schneider can sit. He has earned it. No minor penalties for him?? Nice!

- I have already said that if the Canucks beat the Flyers that they would lose to Carolina on Saturday. I will stand by that. Faith-less aren't I?