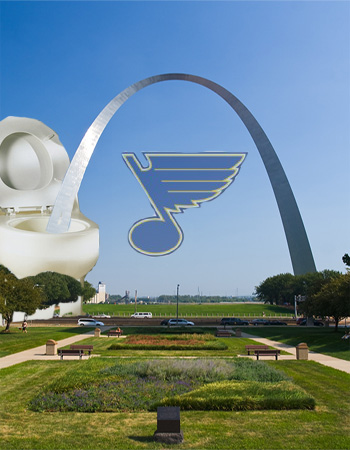 UPDATE 11:55 AM: Thanks to splnwezel for the update via Andy Strickland: Andy McDonald has the flu. e i e i oh! He is most likely not playing tonight. Erik Johnson is out of the doghouse against the Canucks, and Derek Armstrong, (remember him?) will play in his first NHL game this season.

The starting time of the game was moved back an hour, from 5 to 4 pm. I'm not sure why. Maybe it's because the Blues want to get the game over with earlier so they can start drinking sooner. Why the long faces in St. Louis? Ah, there are several reasons. The Blues have the worst home record in the NHL by far. 6-13-2. They are 1-5 at the Scottrade Center in the month of December, while posting a 6-2 record on the road. When the Blues beat the Canucks 3-1 in a stinker at GM Place on December 20, they climbed out of the Western basement. They followed that game with 2 victories over Edmonton and Calgary, only to lose their last 3 games. They are now only 3 points up on last place Edmonton and 8 points out of a playoff spot.

The Canucks used that loss as a stepping stone. They have a 3-0-1 record since. They have to kill the Central Division jinx though. They are 1-7 against Central teams this season.

Remember what happened before the Blues-Canucks game on December? Blues' GM Larry Pleau reportedly went into the team's dressing room and told the players that he will not fire coach Andy Murray and that they had better pull up their socks.

Now, 3 wins and 3 losses later and no sign of identity from the club, fans want Murray's head on a platter. It's a mess there right now. Let's hope the Canucks can make it even more unfavorable.

Vancouver has problems of their own. With Kevin Bieksa lost potentially for a long time to a leg injury, and with Mathieu Schneider done as a Canuck, Aaron Rome now gets a big chance to play in the top 6 and make a name for himself. It's not Rome that I am worried about. It's the question marks that would ensue if another D-man gets injured. Who would get called up next? I have several opinions on that which I won't get into now. Where's Brent Sopel when you need him? I kid. In all seriousness, I'm sure Gillis is looking for another D-man right now.

I'm going to quote Rocky "forget about it" Bonnano from NHL.com:

Best thing for Vancouver is to score first. Take ownership of this Blues team early, especially with their fragility on home ice. I don't want to hear Alain Vigneault saying post game: "Hey the Blues are not a bad team. It's a tight race in the West." F*ck that. The Canucks need to continue their strong play and dispose of these guys.

With both Calgary and Colorado winning on Wednesday, the Canucks need to keep pace. If the Canucks lose to the Blues in regulation and both the Kings and Stars win their games, the Canucks will once again be out of a playoff spot. Am I being too negative? Probably. I have faith. No really, I do!

The Sedins will need to make amends for the December 20th loss to the Blues. They were hardly a factor. Ty Conklin looked sharp for St. Louis, but the Canucks did not pepper him with many quality shots.

Watch out for Ryan Kesler tonight. He threw his stick in disgust after the shootout loss to Phoenix. I'm sure he wasn't happy with his play.

Paul Kariya may not play tonight as he has a head injury. Must be that open gap between his ears. Not sure if Erik Johnson is out of Murray's doghouse yet either.