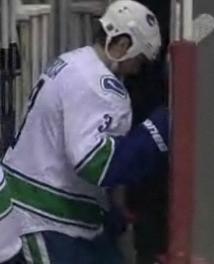 Imagine that. Bad luck has struck Kevin Bieksa again, as he was cut just above the left ankle by Petr Prucha's skate as he pasted him into the boards. The Vancouver Sun reports that Bieksa was leaning heavily on crutches after the game and would not comment much about it. An MRI may suggest that he will miss weeks of action.

Now, in a huge case of irony, the Canucks will call up Mathieu Schneider, who will have to clear re-entry waivers first. A team can claim him at a fraction of the cost, so we'll see what happens there. The Sun states that if Schneider does not clear waivers, Aaron Rome will replace Bieksa. I thought that was happening already, which was part of the reason Schneider left. This could get "tricky".

UPDATE: The Province is reporting that Willie Mitchell got hit with a shot in practice this morning, dropped his stick, and limped off the ice, muttering and swearing. He did not return to the ice. The puck struck his thumb. He'll be fine for Thursday's game.

UPDATE: 12:06PM: Just to clarify the Mathieu Schneider situation: He cleared waivers this morning, but the Canucks and Schneider have agreed to part ways. Schneider will not be recalled or play in a Canucks jersey ever again. Thanks, Matt....for nothing.

UPDATE 2:00 PM: Rather than put him on re-entry waivers, the Canucks are still actively trying to trade Mathieu Schneider.