Share All sharing options for: The Dogs Are Deadly: Canucks - Coyotes Preview 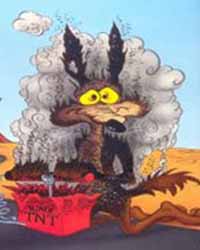 THE ENEMY: Five For Howling

UPDATE 1:58 PM: Bolduc in, Hansen out. Coach was a little discouraged with Hansen's play in the Canucks' zone last game, plus he likes Bolduc's ability to take draws from the left side (like Johnson does).

UPDATE 11:43 AM: With Bolduc being called up, does he draw right into the lineup and somebody else sits? The Canucks depth chart has Bolduc centering line 4 with Jannik Hansen out. That doesn't seem right to me. Hansen doesn't deserve to sit.

UPDATE 7:38 AM: About 3 more weeks of rehab for Pavol Demitra and he should be cleared to play.

UPDATE 7:30 AM: Jason LaBarbera will start for the Coyotes. Hat tip to Jevant for the info and link.

It's amazing how a new coach can change the fate of a team. The Coyotes, who were the "joke" of the summer with the potential buyer / relocation debacle, have quickly evolved into a successful team under coach Dave Tippett. What is Tippett bringing that Wayne Gretzky could not? A defence-first strategy that all of the players are buying into. It doesn't translate into many goals (Phoenix has the 5th-fewest goals for in the West) but it sure helps in the goals against category, where only the Blackhawks and Devils have allowed fewer goals. The success has Phoenix currently in 4th spot in the West, 3 points behind the Pacific-leading Sharks. They have extra motivation for tonight. If they win they will shatter a franchise record for consecutive wins at home (10), which will add to their brilliant 15-5-0 home record this season.

Cute stories. However, they are only 4 points ahead of Vancouver and need to be destroyed immediately. The Canucks, for the 4th time this year, have an opportunity to win 4 games in a row. They have failed to do so 3 times. More importantly, they can pull ahead of 9th place Detroit by 4 points and within 2 points of the Northwest Division-leading Avalanche.

More after the jump..

-Keith Yandle has 2 goals and 4 assists

-Scottie Upshall has 3 goals and 3 assists

-Martin Hanzal has 3 goals and 5 points

-Matthew Lombardi, who the Flames pissed away for Olli Jokinen, has 1 goal and 4 assists

Check this out, Ilya Bryzgalov has:

-The second-most wins in the NHL

-The 4th-best goals against average

-Tied for 3rd with save percentage.

-The most shutouts in the League (5)

-The second-most time on the ice.

Is he a beast or what? Many people are waiting for the Coyotes' break-out party to abruptly end, but I don't see it happening. Not with Tippett's structure in place combined with Bryzgalov's stellar play. Hey, I was tooting Miikka Kiprusoff's horn prior to the Canucks-Flames game and Kipper was pulled. Think that will happen again?

This will be the 2nd game in 2 nights for Phoenix. They lost in a shootout to the Sharks on Monday night. Wouldn't it be something if Barbie gets the start tonight?

There are 4 former Canucks on Phoenix's roster: Taylor Pyatt, Jason LaBarbera, Adrian Aucoin and Ed Jovanovski. Speaking of Pyatt, a few Canucks and their coach had some great things to say about their former teammate on Monday. Also, the Canucks are giving Michael Grabner a few more games with the Moose for conditioning purposes before they consider calling him up. You can read about Pyatt and Grabner here.