Willie Mitchell: What Should The Canucks Do With Him?

Share All sharing options for: Willie Mitchell: What Should The Canucks Do With Him?

Mike Gillis is going to have some heavy decisions to make between now and the summer time in regards to contracts, and Willie Mitchell's fate is one of them.

More after the poll and jumpy thing...

First of all, thanks to vancitydan for bringing up the Mitchell issue a few days ago. I think it's worth discussing.

Secondly, the only Canucks jersey I own with a name on it is Mitchell's. I have always liked his grit and ability as a shutdown defenceman. But I will not let any kind of selfishness or bias (of my jersey becoming a thing of the past, for example) interfere with what I am about to say.

Here is a visual of Willie's main stats over the years: 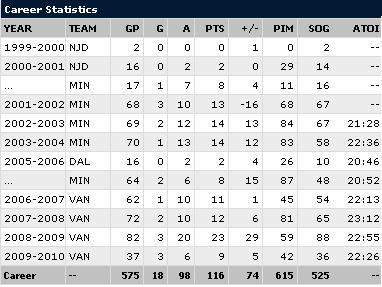 A number of factors can be drawn from those statistics and beyond. First of all, his ice time as a shutdown guy has not changed much from his time in Minnesota compared to here. Secondly, he looks to match his career point totals from last season. There lies the problem. Increased offensive stats. So is BC-born Mitchell going to demand more now that he is nearly duplicating his former average points-per year stats? Only Willie and his agent know this. Or, where do Willie's loyalties lie? In his favorite team growing up or on a fatter contract elsewhere?

I can give you an estimated guess or two. If he wants a raise, he's probably gone, or the terms of a possible re-signing here won't come down to $$$ as much as length of terms. I'd like to see him sign here multi-year for the same price and wishfully less to aid the team financially under the cap. The 32 year-old Mitchell does not deserve to earn more than $3.5 million per season does he?

Let's look at a few other NHL D-men's salaries:

Let me stop there. Mitchell is not in the same ballpark as those guys. He should make half of what Boyle makes....or the Sharks got themselves a great deal. The closest player that I can see that is even comparable to Mitchell is Flames' Robyn Regehr. The 29 year-old D-man gets about the same ice-time, points and playing minutes as Mitchell does and is slated to make $4 million over the next 3 seasons. I'm going to call that over-payment by Calgary. Yes I am. But not by much.

Here is a list of D-men in Mitchell's age range who are currently or are slated to make as much as he currently makes ($3.5 per season) beyond Robyn Regehr (give or take $500,000):

Dear God, did I just talk myself out of my argument? M'eh, not really. Contracts may vary because of stupid spending (bidding wars) in UFA summers (see Jeff Finger), potential over-valuing of players driving up the market, etc. One factor remains with the majority of players on that list: Mitchell does not put up as many points they do, but is arguably as-good or a better shutdown guy than the majority of them.

Personally, I'd like to see the Canucks commit long-term to Mitchell (scraps in practice and all, which seem to be more beneficial than not) on a 4-5 year deal with a smaller cap hit. You up for it, Mike Gillis? Mitchell? You Canucks fans agree? There are so many variables pro and con for re-signing the guy, including worth, other expiring contracts, team direction, etc. Make your voice be heard on the poll and in the comments section.