(The image? Oh, I was reading Canucks Hockey Blog today and saw that Alix Wright had made a Hank The Tank Superstar animated pic, so I tried one). Speaking of CHB, check out their post called "Canucks Christmas Gifts From The Canucks Blogosphere." I mentioned that I wanted to give Steve Bernier new hands for Christmas. Then he pots one last game. Way to ruin my gift idea, Steve.

I'd like to take this time to thank each and every one of you who drop by the site to read, comment and/or post material at Nucks Misconduct. It's always a pleasure attempting to keep you up to date and mingling with you all through thick and thin.

Merry Christmas! Enjoy the holidays and the time with your family and friends! As for me, I'm going to skip the turkey dinner and spend time looking for Mathieu Schneider. I was thinking about checking out the tracks for the SkyTrain first, then the old age home second. Just wanna give him a Christmas card and a brotherly hug and let him know that it's all going to be alright. 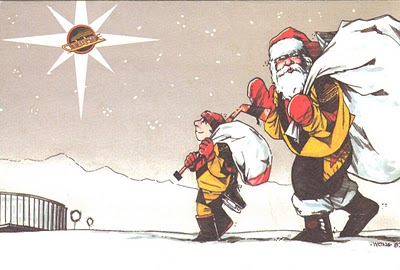 First off, my apologies for being MIA in the past few weeks. As some of you may know, I'm busy moving myself from NYC to San Francisco and, because I have a dog, I opted to drive. Across country. In winter. Because I'm an idiot. But soon it'll be done, my random nights in odd motels over and I'll be on the left coast finally (which I understand is the best coast?).

In the meantime, I want to echo what Sean said above and thank everyone for being part of our little home here. Sean and I are about two months away from our first anniversary here at NM and it's been a hell of a ride, due in part to our wildly inconsistent yet ever lovable Canucks and to you all for making the site's content the best out there for Vancouver fans and foes alike.

No matter what country or time zone you find yourself in, have a great time with your family and friends. And rest up since we're barreling into 2010 with Olympic and NHL playoff gold in mind.