Share All sharing options for: Canucks Finally Move Into Top 8 In West With 4-1 Victory Over Predators 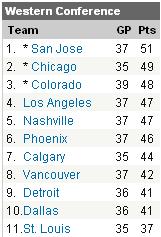 Oh my. For the first time this season (I believe) we can finally say that the Canucks hold a playoff spot (image on left from Yahoo Sports). It may not last more than 20 hours, as both Detroit and Dallas (who are both 1 point behind Vancouver) play Wednesday night. A win for either team bumps us out again. But hey! Let's enjoy this while it lasts!

What a game. That was a tenacious, aggressive and consistent effort from the Canucks. It was almost predictable, considering how they play against red-hot teams. They killed Nashville's winning streak with style, out-shooting the Preds 36-21, and not being out-shot in any period. Hell, their 2nd period was fantastic, out-shooting Nashville 14-7, killing 2 penalties (and having no powerplays) and out-scoring the pesky Preds 2-0.

The Sedins had only 1 point combined in the previous 2 Canucks games. They combined for 6 points tonight and stole the show.

A few whack stats after the jump:

-Christian Ehrhoff was a -1 with no points and 5 shots.

-The much-scrutinized Kevin Bieksa still played less minutes (18:46), had 1 assist and was an even zero. Somebody mentioned in the game thread that he had not heard much from Bieksa tonight and that was probably a good thing. I guess so.

-Willie Mitchell and Sami Salo each finished a +3 on the night.

-Jason Arnott, Martin Erat and Steve Sullivan were no match for our top line. They each finished -3. Erat had a hat trick to obliterate the Canucks a couple weeks back, but had zero points and 1 shot tonight. It's OK to laugh at that.

-That was one of the best games I've seen Kyle Wellwood play all year. He's gotta shoot once in a while though.

-Dave Scatchard....you are a fail.

-What in the blue hell was up with the green men in the stands? That is some funny stuff right there.

Erat fails on the Salo shot that makes it 3-0 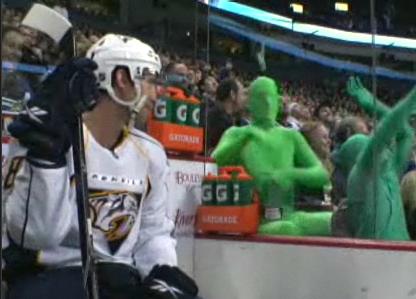 Hat tip to Puck Daddy for finding a clip of the green guys harassing Predators in the P-box: