To Hell With The Devils! Canucks-Devils Preview

Share All sharing options for: To Hell With The Devils! Canucks-Devils Preview 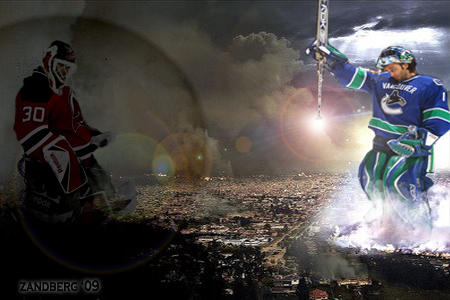 2:38 PM ET Update: Shane O'Brien will play tonight instead of Mathieu Schneider. The Canucks need some more toughness against the Devils, and I'll speculate that Schneider's lousy game a few nights ago didn't help. OB has missed 7 games as a healthy scratch. Taking 10 minor penalties in 17 games didn't help. Always the smartass, OB told the Province today: "I already told the guys, to be ready to kill one off."

Ryan Johnson is a man's man. He will play tonight, bruised leg and all. And he won't change his style of play either. Balls, you rule, man!

As Missy had mentioned earlier, Rick Rypien should be good to go tonight. That means Darcy Hordichuk will sit this one out.

"I'm going to TiVo it and watch it later," Yzerman told ESPN.com on Tuesday. "I'm going to be at another game [Tampa at Boston], but when I saw this game [Canucks-Devils] on the schedule, I wanted to make sure I watched it."

THE WICKED: In Lou We Trust

When the Devils beat the Canucks 5-3 at GM Place in their only meeting last year, Brodeur and Luongo were not even playing between the pipes. It was Scott Clemmenson vs Jason Labarbera. Barbie had a rough start, facing 6 shots in the 3 minutes he played and allowing 2 goals. Curtis Sanford replaced him. In 2007-08 the 2 teams played each other once, with the Canucks winning 5-0 at GM Place. That was a Luongo-Brodeur showdown that we can appreciate.

Since the 1997-98 season, New Jersey and Vancouver have only butted heads 13 times. The Canucks have a 8-5 record against them, and outscoring them 35-34 in the process. But that's all history.

The media is going to write a "Brodeur vs Luongo: who's starting for Team Canada?" angle for this game. However, neither goalie is buying into the hype.  So far, Brodeur has Lou by the bag.

Brodeur was named the NHL's 2nd Star of the Week after winning 3 straight games and posting stellar 0.97 GAA and .963 save percentage.

The Devils hold a 7-4 record at home this year, but an even more impressive 10-2-1 record on the road. The road is where the Canucks are anything but warriors so far this year, posting a dismal 4-8-0 record. Vancouver needs to be better than a .500 team on this trip, and it won't be easy. The night after the Devils game, the Canucks play the Flyers.

Vancouver is now 9 points behind the (puke) Flames, who are clinging to the top spot in the Northwest right now. That being said, the Nucks are still only 3 points out of a playoff spot.

Goals Against Per Game: Devils #1 in the NHL, Canucks 10th

Devils to watch out for:

One thing about the Devils: their defence is very effective defensively, but not offensively. Their best scorer from the back is Andy Greene, with 3 goals and 12 points in 21 games. It drops off considerably after that.

Remember when we used to be called the Devils of the West? Well don't let that fool you. This could be a high-scoring game.