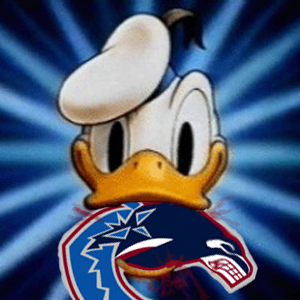 That was a tough game to watch. Do the Canucks fear the Ducks? It's hard to say. Anaheim skated circles around Vancouver for most of the night, including out-shooting an entranced Nucks 13-2 in the first period. Had it not been for the play of Roberto Luongo the Ducks would have buried the Canucks 7-2 all over again.

Vancouver couldn't establish much of a forecheck for the first half of the game. They lost battles for the puck at both ends of the ice over and over again. They turned the puck over continually. Way too many odd-man rushes against. When Vancouver finally established some pressure in the Ducks' zone and generated quality chances, especially in the 3rd, Jonas Hiller stoned them. By then not only was it too late, but they hardly deserved to be in the game, period.

The Ducks' new red-hot second line scored 5 points. Sexton-Koivu-Calder (?). That dirty little Fin scores the winning goal with under 5:00 to play in the 3rd period. A power play goal. Kevin Bieksa, who I thought was atrocious tonight, was sitting in the box for that one. Actually, I am not sure if words can describe my disdain for Bieksa.

I tip my hat to Luongo's performance, and I also feel bad for him. No help from his mates tonight. Terrible outcome.

A blown chance. A fail. Right there, you want to get it to overtime to at least get that point....

Something tells me the Ducks are going to start rolling now. That is too good a team to be rotting in the Western basement.