Canucks Hold On To Beat Wild 4-3

Share All sharing options for: Canucks Hold On To Beat Wild 4-3 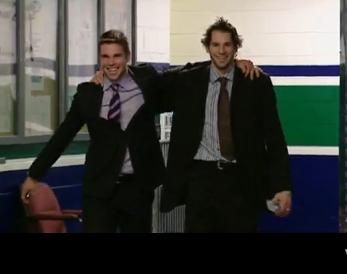 Quietly, Henrik Sedin has scored 501 points in his NHL career. With 3 assists tonight he has moved into a tie with Marian Gaborik at 2nd place in League scoring. Individual stats are fine and dandy, but right now the team's stats are more important. The Canucks needed those 2 points:

1. To pull 3 points ahead of the surging Wild in the standings

2. To keep pace with the 6th, 7th and 8th seeds in the West (Coyotes, Predators and Stars). All 3 of those teams earned at least a point tonight. Damn!

-The Wild outshot Vancouver in all 3 periods, finishing with a 41-29 margin. Roberto Luongo was pretty solid.

-I have to give the Wild props. What a hell of a road game for them, even in a back-to-back scenario. Canucks take note! Sure, they lost, but they hardly let up. That is one tenacious speedy team.

-Marty Havlat...hate the guy.... but he scored a goal and 3 points tonight. I believe he is finding his groove.

-The game was entertaining, but too wide open for my liking. How many odd-man rushes did the Canucks give up? Is that how we are going to play? That won't cut it if we are looking for consistency.

-Kesler and Mitchell playing it up for the media pregame was priceless. You can see video footage of the scrum and the brotherly love here.

I still can't believe Boogaard tried to pull that interference stunt...and then got busted for diving. The guy bounced off Kevin Bieksa like a bus hit him! Are you kidding me? Is this guy a soccer player in disguise? Pathetic. 2 minutes for being stupid. And, Mason Raymond scored on the ensuing power play. On second thought: Dive Boogey dive!

Next up: The Western Conference-leading Los Angeles Kings. That a misprint? Wow. Remember what I said about "too wide open". It would be best if the Canucks tighten it up a little against the high-octane Kings.