The Hottest Team In The West Comes To Town: Canucks-Wild Preview

Share All sharing options for: The Hottest Team In The West Comes To Town: Canucks-Wild Preview 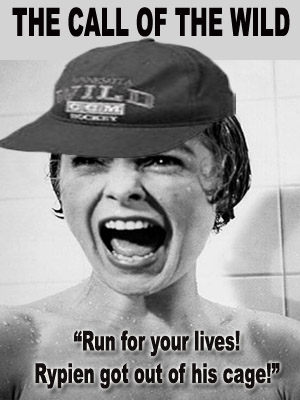 Update (2:12 PST): Dan Murphy is reporting on Twitter that Josh Harding will start for the Wild tonight and Canucks 1st round draft pick from 2000 Nathan Smith will take the place of the injured Owen Nolan.

The Minnesota Wild may have won 5 of 14 in October and 5 of 11 in November, but they have won 6 of 7 in December, including an 8-1-1 record in their last 10. The only other NHL teams that are cookin' like the Wild are the Capitals and Bruins. I managed to watch the 3rd period and OT of the Wild-Flames game last night. The Wild are still playing well defensively, but are utilizing a super speed and aggressive game as well. You'll see it when they play the Canucks tonight. This is a team that is rising from the Western Conference basement and making a push for a playoff spot.

It's madness. Only 6 points separate 8th place Dallas from 14th place St. Louis, and the Canucks are right in the middle of the dung heap. It further emphasizes the point that the Canucks need to get on a roll...and quick. Once again, Vancouver plays a team that is playing the 2nd game in 2 nights. That is not something to take for granted, as I had mentioned Minny's speed game is intense.

Martin Havlat has not found his game in Minnesota yet. However, right when the play-by-play guys were mentioning his 2 goals, 9 assists and -17 rating this season, Havlat bagged the OT winner tonight. He finished with a goal and an assist and a +2 rating against the Flames. How unlike him. He now has 1 goal and 4 assists in his last 8 games. He's slowly heating up.

-Andrew Brunette has 1 goal and 8 assists

-Mikko Koivu has 3 goals and 4 assists

-Antii Miettinen has 5 goals and 1 assist

The last time the Wild played in a back-to-back scenario, Josh Harding, who's stats are nowhere near as good as Niklas Backstrom's, got the start in a 5-3 win over the Predators on December 5th. I wonder if Harding plays tonight.

Mike Gillis is not so happy with the Canucks' efforts so far this season, and he let them hear about it on Thursday.  He challenged the players to "look in the mirror".

"There was a sense of complacency," he said. "I think our guys thought, OK, let's just get back in the playoffs and redeem ourselves for what happened with Chicago and forgot you've got to play 82 games to get into the playoffs. I think now it's been imparted to them that no one's happy with where we sit today. I believe this team is a better one than we had last year and we've yet to show it on a consistent basis."

More on that here.

Kyle Wellwood will likely sit out again tonight, as he continues to occupy Alain Vigneault's doghouse over Darcy Hordichuk.

has a 10-11-4 with a tie and 2.66 GAA versus the Wild, but has allowed four goals on 71 shots while winning his last three starts against them.

There is so much hype surrounding Rick Rypien over the past 2 days and his ability to kill almost anyone. Will we see a Rypper-Boogaard tilt? I've wondered this twice this year already and nothing has happened. Maybe the Boogeyman is afraid? Haha. I don't think so. Boogaard fought Brian McGrattan last night and won:

Rypien-Boogaard is a tilt I've been dying to see. That would be Rypien's ultimate test.

Mason Raymond will be the guest on CBC's After Hours post game.