Share All sharing options for: Sedins Climbing The Canucks Charts 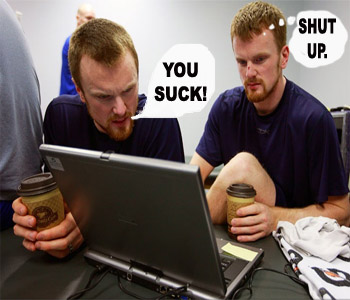 The Sedins may be accused of getting too fancy with their plays, especially when the Canucks lose, (or go through a goal-scoring drought), but when they are clicking and "on" they make opposing teams pay, right Atlanta? It's great to see them not only putting up numbers in the first year of their new 5-year lucrative contracts, but also being on pace to exceed what they have done in the past.

Only once has a Sedin exceeded 82 points in a season, and that was Daniel in 2006-07 where he scored 84 points. Henrik, if he can remain healthy, looks poised to hit the 100-point plateau or exceed it. He is averaging 1.225 points-per-game. Daniel is averaging 1.231 points per game. Gee, how identical. This was brought up last night in the comments thread:

Henrik is currently in 3rd spot in NHL scoring, 1 point ahead of Sidney Crosby and 1 point behind Marian Gaborik. However, his average ice-time per game is considerably less than any NHL player in the top 20 League leaders in points. He gets around the same amount of shifts on average but less time on ice. More to his credit!

The consistent brothers are continually surpassing some of all-time Canucks players' stats. I've posted about this before but thought I'd give you some updates. Keep in mind that these are all regular season stats.

-needs 2 more points to reach 500 in his career. Get ready to cheer!

-this season he has passed both Tony Tanti and Pavel Bure in career Canuck points for sole possession of 5th spot, 52 points behind Thomas Gradin and 258 points behind all-time Canucks leader Markus Naslund (756).

-his current 375 assists ranks him 4th on the all-time Canucks list, 40 assists behind all-time leader Trevor Linden (415). It took Linden about 16 seasons to accomplish that. Hank is in his 9th season.

-his 123 goals has moved him past Cliff Ronning, Darcy Rota and Andre Boudrias for 16th spot, 10 goals behind Patrick Sundstrom.

-his 3 game-winning goals now gives him 20 on his career, and that has bumped him past 6 Canucks and in a tie for 9th overall with Stan Smyl. Clutch.

-had he not suffered the foot injury, both brothers could have celebrated the 500 point plateau on the same night. Wouldn't that have been crazy? Dank needs 22 more points to hit that mark.

-his 478 career points has him tied with Pavel Bure for 5th overall on the all-time Canucks scoring list.

-he recently passed Dennis Kearns (290) in the all-time assist category for sole possession of 6th spot (293).

-his 3 game-winning goals gives him a career total of 39, which is 10 behind all-time leader Markus Naslund.

It is quite possible that a Sedin could hold every major Canucks record (goals, assists, points) and it's going to take some schmuck forever to catch them. It's also amazing to think the the Sedins began their careers here and started slow offensively, and then were the Canucks' second line in the West Coast Express years. Now as they hit their prime as #1 line players, devastation is ensuing.

Canuck stats source: Canucks Library. Keep in mind that the Library site has only updated up to the end of last season, so some minor math was required.