Oh My..The Canucks DO Have A Pulse!

Share All sharing options for: Oh My..The Canucks DO Have A Pulse!

That was a game the Canucks didn't have to win, but needed to. I'm sure they had a bit of fatigue issues themselves, having arriving in Vancouver the day after the Preds game, but they still took it to the Thrashers, who were playing in a back-to-back situation. I'll keep this in point form.

-I don't think Ilya Kovalchuk liked being limited the way he was. His anger boiled over at Ryan Kesler late in the game. Kovalchuk played 27:03 (wow), had 1 assist and only 3 shots and a -2. Rich Peverley continued his point-producing ways, tallying 2 assists, 2 shots and was a +1. Nik Antropov scored a goal, was a -2, and played over 23:00. Many of those minutes he was on the ice too long, to the dismay of Atlanta coach John Anderson. John Shorthouse and John Garrett said he looked like the Leafs version of Antropov more than the Thrashers version. I laughed. Nothing doing for Maxim Afinogenov either. The Thrashers tried for the stretch passes all night long to spring breakaways but the Canucks would have none of it.

More after the jump

-Thanks to yoata, Steve Bernier's middle name is now "Almost". That guy just can't bury his chances lately. Not consistently anyway. He still finished with 1 assist, 3 shots and a +1.

-It's all about the Sedins tonight. When they play games like that, we win. Daniel had several chances to score 4 goals. He finished with a hatty and 10 bloody shots! Whoa!

-Brother Hank had 2 assists. He is now 3rd in NHL scoring with 38 points, 1 behind Marian Gaborik and 4 behind Jumbo Joe Thornton.

-2 assists for Alex Burrows tonight. He could have scored a couple but was either snake-bit or missed the net.

-This game could have been a worse result for the Thrashers if not for Ondrej Pavelec. I thought he looked pretty good after the Canucks scored a few flukey ones on him earlier in the game.

-With Kyle Wellwood benched, Darcy Hordichuk got the call. But all he did was get into a fight, show some hustle, and play a MERE 4:29. Huh.

-For a supposed tired team...the Thrashers looked pretty quick throughout the game, but mentally their game was not there.

-Look at the shots on goal (click on the BOXSCORE link). The Canucks never let up on these guys.

-For the record: the Canucks PPV channel (once they go off the air) turns into a "fireplace" channel. That's so smart. Now I can cozy up all by myself to a fake fire because my wife left me because I watch too much hockey. Thanks, Canucks! How about you put a vintage Canucks game on instead? You know...so I can get the best bang out of my $13.00?

3. Rick Rypien. That's throwing the champ a bone. He didn't get a lot of ice-time, but was a force every time he was on the ice. Ripper...I love you man! Is his killing of Boris Valabik on YouTube yet? Why yes it is. Here ya go:

And just to throw in a screen capture...check out the Van fans after the Ripper fight... 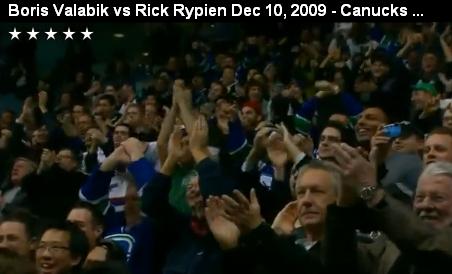 Yeah..don't EVER eliminate fighting from the game. Ever.