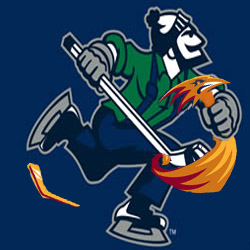 Update (2:39 PM): AV is pissed. From the Province today: Every time so far this year when I think we're getting on a roll and we're getting traction, we sort of find a way to piss me off again,” Vigneault said following the Canucks' morning skate. “So it's what we're faced with right now. Talk is fine but we need actions. They're a strong group, we believe in them and we have to let their actions speak for themselves with their play on the ice.”

Yeah, you tell 'em, Viggy! You get the feeling the Thrashers are walking into a lion's den tonight? I hope so.

Update (11:55 AM): MindRoom Science and the power of positivity for your Vancouver Canucks? Oh for f**k's sakes. How about my foot in your ass?

Update (11:51 AM): "Looks like meat's back on the menu boys!" OK, not always. There's an entertaining piece up at Canucks.com about what the Canucks eat, or can't eat, etc. Check it out.

Update (8:48 AM): A great piece in the Province today about knee-jerk reactions, slow start trends and how little ice-time the Sedins get. Here is an excerpt:

What never seems to change, however, is the Canucks' dependence on a strong second half. Since Alain Vigneault took over as coach, Vancouver's seasons have followed a remarkably similar script. His team point totals on Dec. 9 in his four seasons have been 29, 35, 33 and, this year, 32. Those reflect mediocre first halfs which force a mad dash for the playoffs. It's worked two of his three seasons. If it's to work again, the Canucks need to use this eight-game homestand as a springboard.

The inconsistent Canucks return home to play 8 straight games at GM Place in the span of 17 nights. With a 10-4 home record this season, this is their big chance to get on a roll and figure out what it takes to win consistently. Rather than beat the Predators and get into a playoff spot last game, they lost in angering fashion and now sit in 12th spot in the West, 3 points out of a playoff spot. The Flames, who own top spot in the Northwest are now 9 points ahead of us. I'm not going to say any more about the Nucks. I thought all of your inputs in Mike's "Grievance" post below were excellent.

The Thrashers are better on the road (9-4-1) than they are at home (6-6-2). They sit in 6th spot in the East, 3 points up on the 9th place Rangers. This game will not be easy for them (or will it?) Vancouver is the final stop in their 4 game road trip. They have won once and lost 2 so far on the trip. They have played (in order) Florida, Toronto and Calgary. This will be their 2nd game in 2 nights after losing 3-1 in Calgary last night. A perfect chance for the Canucks to take advantage of a tiring team.

Atlanta had a 6-4-1 record in October, a hot 9-3-2 record in November and a 1-3 record in December. Their management is trying their best to keep Ilya Kovalchuk in Atlanta. Kovalchuk wants to be sure that the team is headed in a winning direction before committing. I can't blame him. Long have the Thrashers toiled in mediocrity. Their success this year caught me by surprise. They have been without their #1 goalie Kari Lehtonen for the entire season due to back surgery. But they seem to have been getting decent goaltending from the 22-year-old Czech Ondrej Pavelec, and excellent results from The Moose Johan Hedberg. Remember him? He was part of the Canucks' goalie graveyard. 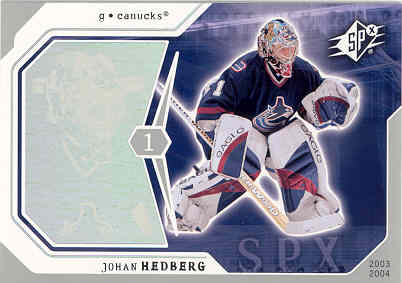 A real like-able guy. The crowd always chanted "Moose!" when he made a stellar save. After playing 13 games this season, Hedberg is making a strong case to backup Henrik Ludqvist for the Swedes at the Olympics. His save percentage and GAA rank 2nd and 5th best in the NHL.

We most likely won't see Hedberg between the pipes against the Canucks. He played last night in Atlanta's loss to the Flames.

The Thrashers have several decent weapons in their arsenal. Kovalchuk is still his kick-ass ol' self with 16 goals and 27 points in 22 games. I wonder if the Predators have any regrets for putting Rich Peverley on waivers last January. He has 10 goals and 27 points in 28 games this season. He is making $500,000. His $1.3 million earnings kick in next season. Maxim Afinogenov has found a home in Atlanta. His role was being diminished in Buffalo due to bad defensive play (among other things I'm sure) and they didn't renew his services after his contract expired last summer. You can't be a -16 player in Buffalo. Maxim (cool name or what?) went unclaimed ALL SUMMER. I thought he was heading back to Russia. Atlanta took a chance on him on September 29th and signed him to a 1-year $800,000 contract. I like this kid. He looks and even skates like Pavel Bure. He will definitely be noticeable on the ice tonight. He currently has 11 goals and 15 assists in 27 games this season. He is also a +4. Not bad for a guy that nobody wanted.

Watch out for that Colby Armstrong guy. He doesn't look like a guy that can demolish players with devastating hits, but he can! He reminds me of Mike Peca. Check out some of the carnage here.