Share All sharing options for: Canucks vs Stars Game Thread

UPDATE: 5:05 PM PST: According to the Province, Shane O'Brien may slot into the lineup and Mathieu Schneider will sit. Guess they really don't want to pay MS his games-played bonuses.....

This test for the Canucks will be even greater than last night's game. First of all, we'll see if fatigue sets in as the game wears along, as this is a back-to-back game scenario for Vancouver. I thought the Canucks were junk in the 2nd game of BTB games, but I did a bit of research and they have a 7-6-1 record in this scenario (regular season) since the beginning of last season.

My biggest concern is in goal, where Cory Schneider will get his first start of the season. He has only played in the 3rd period in the Ducks game this season, where they scored 3 goals on him in 12 shots. From what I recall, he wasn't getting much help from his mates, and Joffrey Lupul pulled off that insane bank job off the boards to fool the kid, who went behind the net to play what he thought was a dump in.

Schneider's stats from last year don't do much to instill much confidence in me. See below:

I remember several times last year where Schneider just wasn't good enough and the team in front of him hung him out to dry. That's why goalie stats like the ones above can be misleading. The Canucks have been playing super in front of Raycroft (minus the Ducks game). Can they do that for our red-headed little buddy? That will be the key to the game.

The Stars are coming off a disturbing and controversial loss to the Flames, where in overtime the linesmen totally gaffed on a delay of game call. The Flames scored seconds later to win it. I watched the game. It was a terrible break for Dallas. I expect the Stars to come out flying tonight and put that loss behind them.

I had a chance to have a quick chat with ESPN blogger Richard Durrett (Stars blogger) this morning about the Canucks. His piece on that can be found here.

No death metal image tonight, folks. I'm changing it up for one night only (maybe) to cater to the non-bangers.

To the tune: "Yellow" by Coldplay 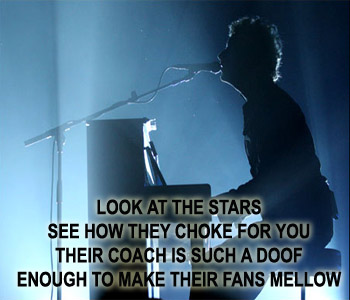