Canucks Have Interest In Forsberg

Share All sharing options for: Canucks Have Interest In Forsberg 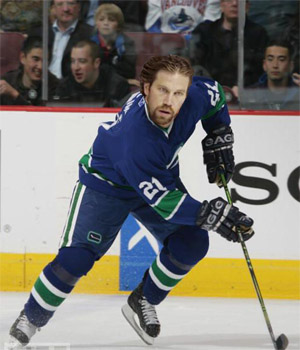 UPDATE: 3:22 PM PST: Globe and Mail is reporting that Forsberg will make his decision about playing in the NHL next week. Gillis believes he has a good chance at landing Forsberg because he has good relations with Peter's agent Don Baizley. I say Forsberg will choose wherever the hell he wants to go, if he plays.

UPDATE: 11:27 AM: The Canucks have sent Director of Player Development Dave Gagner to Finland to monitor Forsberg and see if he is worth pursuing.

Like it or not, a big can of worms was opened up on the Team 1040 Thursday, where they reported that the Canucks have Inge Hammarstrom and Thomas Gradin scouting Peter Forsberg at the Karjala Cup Tournament in Finland. That could have been chalked up as potential bunk, but then the guys talked to Mike Gillis, who confirmed Vancouver's interest in the 36 year-old.....if he's fully fit, reports Matt Sekeras of the Globe and Mail.

"First of all, he needs to find out if he can still play," Gillis said. "If he can, we're definitely interested. I've known his agent, Don Baizley, for a long time and I think we'd be on his short list if Peter decides he wants to play."

So Gillis is chasing a big-name Swedish rental again. So are the Rangers, who have scouts there as well. Deja-vu almost. Forsberg, however, has only played in 6 games over the past 2 years, all for Modo. The previous season he played 9 games with the Avalanche, registering 14 points. His ankle and especially foot ailments have plagued him the whole time. He is still unsure if his foot will heal to the point of playing much longer. But that doesn't mean he's not trying to make a comeback. He still loves to play. But he has told Swedish papers that he has not talked to any NHL team.

To be honest, my interest is piqued, especially if he can get in shape and not have his foot problems get in the way. Look at that picture. That doesn't make you drool a bit?