Share All sharing options for: Thanks Backstrom! Canucks 5 Wild 2

Just when the Wild thought they were on the right track they get beaten by a depleted Canucks team that just will not quit. Nicklas Backstrom was not his usual self, letting in 4 goals on 15 shots. I won't question him on Darcy Hordichuk's goal, as it was a boomer, but the other 3 2 of them were terrible, and really were the turning point in the loss.

Andrew Raycroft outplayed Niklas Backstrom. I repeat: Andrew Raycroft outplayed Niklas Backstrom! This time the Canucks gave Yaycroft (thanks Mike) more shots to deal with (30), and he stopped all but 2. As good as he is playing, he really looks awkward at times, doesn't he? Both goals against he was further out of the net, committed to his butterfly style, and as soon as the puck would get by him the Wild tapped it in. It's hard to nitpick a goalie who is now 4-1-0 since Roberto Luongo went out with rib issues. Tonight he made even more great saves then previous games. Look at Raycroft's numbers (ESPN):

Yeah Raycroft! Keep it up!

The Canucks continue to press even when having a lead, well mostly. The Wild outshot the Canucks 15-4 in the 3rd period but couldn't beat our heroic goalie. The Canucks seem to look comfortable playing in front of him. Imagine the shoes Luongo is going to have to fill when he returns!

-Nice to see the 4th line contribute. Hordichuk's teammates love him, and it's good to see him go from doghouse to goal scorer.

-Also good to see Alex Edler finish with 2 assists and a +2 rating. I think we'll see steady improvement from him.

-The Kesler-Samuelsson-Raymond line finished with 6 shots but all were in the minus category. Nice goal by Raymond though.

QUOTED: "We’re having fun and we believe in each other and every night it’s a new guy stepping up." -Raycroft 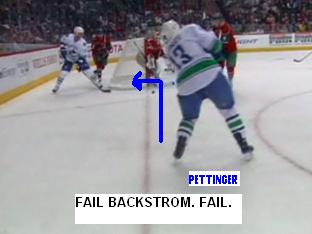