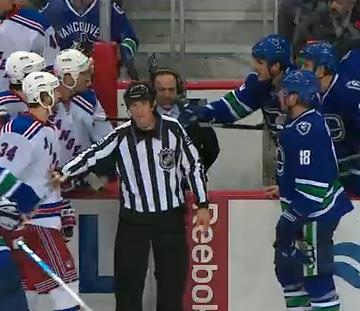 TSN is reporting that Shane O'Brien may be in a little bit of hot water for poking at Sean Avery with his stick from the bench. Comically, Avery grabbed the stick out of O'Brien's hands and kept himself rather composed. UPDATE: O'Brien has been suspended for 1 game.

Rangers' Dane Byers may face gets a 1 game suspension plus a $10,000 fine (edit: coach John Tortorella gets the fine) for instigating a fight with Tanner Glass with less than 5:00 left in the 3rd period (18:50 mark). That's comical too because he'd more or less have triple punishment for his crime: suspension, fine and his ass beat. Just saying.

Here is the video of the entire scuffle/aftermath (plug your ears, kids. Ferraro's mic catches some great profanity):