I'll try keep this brief as most of you saw what happened. If you missed the game...well you missed a beauty. There was so much talk about Marian Gaborik pregame and now it's all about Ryan Kesler, Mikael Samuelsson and Andrew Raycroft. Kesler is looking like a modern-day Trevor Linden of sorts, with 3 assists and playing a huge game. He's carrying the team. Word was that Samuelsson was feeling the pressure to score more prior to the game and he responded with 2 goals. He's good in front of the opposing goal. Both tallies came from in close.

Raycroft is turning into quite a story. He made some great saves tonight. He has played in 6 games for the Canucks and started 4 of them (3-1-0).

-He leads the NHL in goals against average with a bright and shiny 1.52

-He is second in save percentage with a .937

Tonight he made some decent saves, yes, but let's call a spade a spade here. Raycroft has been solid. He has not had to be great. The teams' play in front of him has been terrific, limiting odd man rushes and quality chances against.  Gaborik, who can take over a game on his own,

played over 22:00 tonight, had ZERO points, 1 shot, and was a -1. If that is not a testament to the Canucks' defence then what is? Frustrations mounted in the 3rd as Kesler gave Gaborik a whack with his stick and melee ensued. Kesler and the Canucks, the injury-riddled Canucks, destroyed the Rangers and it was a beautiful sight.

It could have gone either way until some point in the 3rd. Kesler's disallowed "kick in" goal could have been deflating. Chis Higgins' tying goal 6:24 in the 3rd could have spelled doom. But the Canucks kept pressing. About 2.5 minutes later, Ryan Kesler charges into the Rangers' zone to chase a dump-in, draws about 3 Rangers to him and then feathers a beauty pass to Rick Rypien who roofed the puck over the dethroned King Henrik Lundqvist. Geez Ripper, with hands like that how come you don't score more? From there the Canucks scored a powerplay goal and an empty netter to seal the damned deal.

Guess I couldn't keep this brief after all. It's so bloody exciting watching this team spit in the face of adversity and pull out these wins. Yes folks, defence does win. So does a tenacious forecheck and a backup goalie who is playing solid.

Kevin Bieksa on the wing...not bad. Not bad at all.

QUOTED: "I got jumped and somehow we were on the penalty-kill," Ryan Kesler said. "He (Marian Gaborik) cross-checked me, so I gave him a little shot and the next thing you know I have got six guys on top of me." 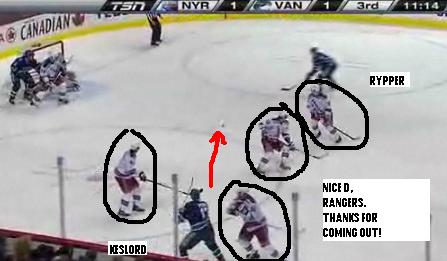