Look, this is my serious face: Canucks & Rangers Game Thread

Share All sharing options for: Look, this is my serious face: Canucks & Rangers Game Thread

That is from CDC. They don't really mean all that much, but are eye-openers. What really matters to the Rangers is having Marian Gaborik in their lineup. The king of soft has 11 goals and 19 points in 13 games for the Rangers this season, as he has broken free of his defensive shackles in Minnesota and appears to be loving it in NY. That's all cute and stuff and gives me goose bumps, yadda yadda (I'm kidding). This was a huge risk for the Rangers to take a chance on this guy. If Gaborik can play 80 games this season, which could be asking for a lot, he could be a top 3 NHL scorer. Gaborik's health is more or less directly tied to the Rangers' success right now. On October 26, the Rangers beat the Coyotes 5-2. Gabby had 3 points. He then missed 2 games with a reported knee injury. The Rangers lost both games (the Islanders and Wild) and managed only 3 goals in those 2 losses. Gaborik returned the next game and scored the only goal in a 1-0 win over the Bruins. Yeah, they love him in New York. I hate him. Nudge nudge...Mitchell...his knee isn't 100% yet. Who's the guy setting up Marian? Vinnie "I never completely unpack" Prospal.

He has 4 goals and 14 assists in 15 games this season. Check out the Rangers stats here. They have some weapons there: Ales Kotalik, the rookie Michael Del Zotto, Sean Avery, but the scoring has dried up over the past few games. Hopefully it stays that way. The Canucks will have to play the same way they did against the Avalanche. If they shut down NY's top line I like their chances. It's just that they are facing another awesome goalie in King Henrik Lundqvist tonight, so they have to make his life hell and park in front of him. Lundqvist has an impressive 2.48 GAA and .920 save percentage in 13 games started this season.

Biggest thing though, get that Gaborik fella. Stay on him. 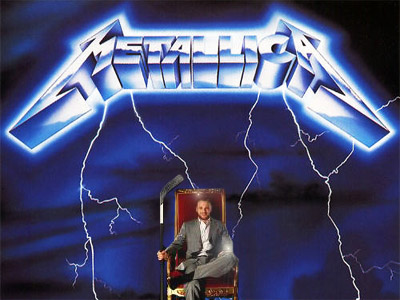