Share All sharing options for: Friday Canucks News and Links 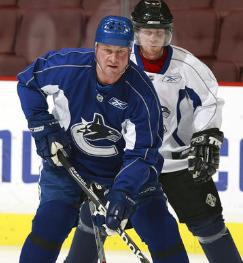 -So Mike Gillis participated in the Canucks' skate prior to the Kings game. I think he's gearing up to play 3rd line center if all else fails. More pictures from yesterday including the pic on the left found at Canucks.com.

-A recent Canucks trip to the Children's Hospital was cancelled, so the Canucks made a DVD for them instead. Here is some video footage of that event. Good stuff.

-I thought I had read somewhere that Rick Rypien had injured his hand. Now, nobody on the Canucks is saying what his injury is. Alain Vigneault is saying he is day-to-day. He is doubtful for tomorrow's game against the Coilers.

Keep your head up, Mrs. Bourdon. We Canucks fans will never forget Luc and always remember you, your family and Luc in our hearts. Hang in there.