On This Day In Canucks History: November 26

Share All sharing options for: On This Day In Canucks History: November 26 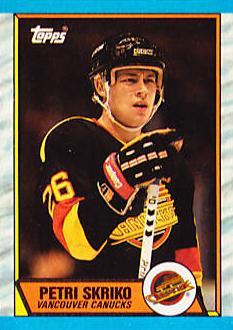 November 26, 1986: Petri Skriko scores his third (!) hat trick in eight days, propelling Vancouver to a 5-3 victory over Los Angeles. Skriko scored 12 goals and added two assists in a span of five games, making it the "hottest" scoring period of any player in Canuck history. His scoring streak also made him the first Canuck named NHL Player of the Month.

One of the most decorated players in Finnish hockey history, Skriko played 472 games and scored 373 points for Vancouver over seven seasons. He lead Vancouver in scoring twice and had four consecutive 30-goal seasons.

In January 1991 Skriko was traded to Boston for a 2nd round pick in the 1992 draft which Vancouver used the pick to pick Michael Peca. Skriko would play a few more seasons with Boston, Winnipeg and San Jose before returning to Finland. According to Wikipedia, Skriko is currently a scout for the Washington Capitals.

(And - son of a bitch - 24 years later Vancouver is facing the Kings and would just love to see a single goal, much less a hat trick. The winds of fate await you gentlemen.)