Every colour in the spectrum! Why the Canucks' varied jersey history is an appropriate symbol of Vancouver

Share All sharing options for: Every colour in the spectrum! Why the Canucks' varied jersey history is an appropriate symbol of Vancouver 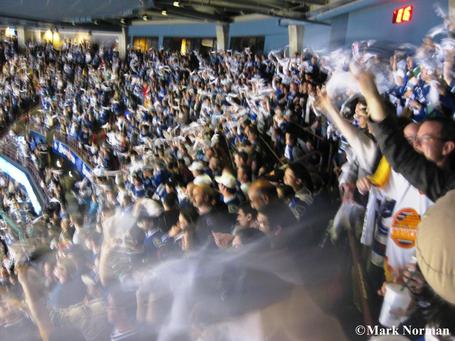 A few weeks ago, a Maple Leafs fan used the comment section to mock the Canucks for the number of uniforms they have worn in the franchise's history. This is typical of the significant amounts of flak the Canucks receive for the comical number of jerseys they have worn in their history-16 by my informal count.* (Feel free to add any I've missed in the comments). The team is accused of lacking tradition, lacking identity and lacking fashion sense. While I sometimes agree with the latter accusation, I disagree wholeheartedly with the first two. In fact, I argue that our colourful jersey is a tradition, and further that it is an appropriate reflection of the diversity of Canucks Nation and Vancouver.

When the Canucks entered the NHL in 1970, Vancouver was-based on what my father, who moved to the city that same year, tells me-a sleepy, relatively unexciting city filled with citizens whose skin-colour mostly matched the ice that the Canucks skated on. The past 40 years has seen huge shifts in the population, reputation, attitude and diversity of the city. A huge influx of immigrants from East and Southeast Asia significantly altered the size and demographics of the population. Expo '86 put Vancouver in the global spotlight and heightened ambitions in Vancouver of becoming a global city. The city's selection as host of the 2010 Winter Olympics is seen by some as confirmation that the city has achieved this goal. In short, the Vancouver of today is virtually indistinguishable from the Vancouver of four decades ago.

Given this ongoing state of flux, I don't think Vancouver can claim much tradition in, well, the traditional sense. Yet I would argue that Vancouver does have a strong tradition-a tradition of dynamism, of constantly inventing and reinventing itself as new people and ideas influence the city and its citizens. I do honestly believe that Vancouver is a model of functional and inclusive multiculturalism-not a perfect one by any stretch, but still one that is matched by few other cities worldwide. And given this civic tradition, I feel that the Canucks' frequent switching of jerseys appropriately reflects the constantly changing face of Vancouver and the diversity of Canucks Nation (which, I should add, includes a huge number of fans who live outside Vancouver, whether in other parts of BC, across Canada or around the world).

I should note that Vancouver is not by any stretch an "It's A Small World" utopia, and like anywhere in the world suffers from its share of racism and ethnic hostility. Furthermore, Vancouver has some of worst urban poverty in Canada. The one area in which I feel the Canucks have failed to represent and accommodate the diversity of Vancouver is in the socioeconomic status of the spectators at games. I bussed through the Downtown Eastside on a near-daily basis last year, and while many people in this area have day-to-day concerns that are far greater than sports, I still observed a huge amount of support for the Canucks. This was most prominently displayed in the form of Canucks flags and banners hanging proudly from the windows of low-income apartments and rundown hotels along Hastings Street. There are a huge number of people throughout Vancouver, not just in the Downtown Eastside, who will likely never be able to afford a Canucks ticket. I realize that this is the reality of pro sports, and I don't know that there is an easy solution. Still, it would be nice to see the Canucks make at least a token effort to make the games more accessible for a greater range of people in the city.

With that important caveat in mind, I still believe that the Canucks are one of the few symbols of Vancouver around which a wide range of people can rally and find a shared sense of identity. When I look at the stands at a Canucks game and see people of different, ages, genders, races and ethnicities cheering together and getting behind their hockey team, I think it is a great reflection of the city. And when these people happen to be wearing a glorious mish-mash of blue, green, yellow, orange, black, white and red jerseys I feel that this is an appropriate symbol of Vancouver's dynamic social fabric. We may not have tradition in the same sense as Montreal, Chicago or Toronto-but this does not mean we do not have an identity. Vancouver's identity is not monolithic, nor can it ever be given its residents' range of cultures and backgrounds. Similarly, the Canucks' identity is not carved in stone but is dynamic and fluid. Contrary to critics who claim that the Canucks' schizophrenic jersey history represents a lack of identity, it is in many ways the clearest assertion of an identity that is reflective of both Vancouver and of the diverse range of people who collectively make up Canucks Nation.