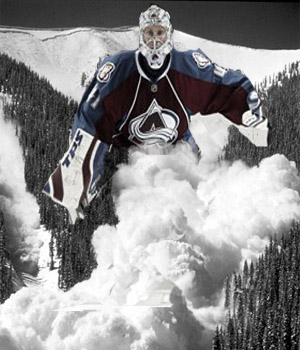 UPDATE: (2:19 PM): The Avalanche will get both John-Michael Liles and TJ Galiardi back into their lineup tonight. Both have missed a fair bit of time. Adam Foote is out with a jaw injury.

UPDATE (12:24 PM): With Daniel Sedin returning to action on Sunday, the Canucks have waived Matt Pettinger. Even so, Pettingzoo will play for the Canucks tonight. Thanks for the fine, hard-nosed work out there, Matt. Appreciated! Good luck to you.

First the good news: According to the Sun it is official: Daniel Sedin skated for a full practice with his mates on Friday and felt pain-free. That being said, Dank will not play on Friday against Colorado, but is good-to-go for Sunday's game against the pesky Blackhawks. He just needs to get back into game shape. I can't wait. I strongly believe his return will have a positive impact on the whole team as Mike and I alluded to a while ago.

The long layoff has allowed the Flames to play some games and catch up to us as far as games played goes. Now they are only 1 game behind us instead of 3 or 4. They are 1-2 in the 3 bouts played this week while we sat by idly picking the crap from between our teeth.

That's about it for the good news. So let's dig in with the rest!

Alexandre Burrows has been playing with nagging groin and hip flexor issues thanks to a crushing hit from Kings' Drew Doughty on October 29th. Don't remember that hit? Check it out here.

After the Canucks destroyed the Avalanche 8-2 last weekend, Colorado and Craig Anderson responded with a 3-2 win over the Flames 3 days later. Anderson faced 36 shots (typical of the Avalanche)  in that one and rebounded masterfully. The next night, Colorado faced the Oilers and put Peter Budaj in net to give Anderson a rest. Budaj faced 33 shots (see a trend there?) and allowed 5 goals against (and the Oilers scored an empty netter) to win that game 6-4. Many pundits are now wondering if it's all downhill for the Avalanche from here. I'm not one of them. I think Anderson is for real.

So now the Canucks get to face a squad that will be thirsty for revenge after the 8-2 slaughter. This after almost a 6 day layoff between games. If Vancouver comes out of the gates slow - which is quite possible - Roberto Luongo is going to have to save them until they get their legs back under them. They will have to get in Anderson's face again like last game. That was so effective.

The pressure continues to mount on Kyle Wellwood who, with Daniel still out, will most likely get another chance as a 2nd line center to break out of his terrible scoring slump.

"Sooner or later he is going to have to produce," Alain Vigneault said Wednesday. "It's a performance-based business and our injuries are coming back . . .Kyle is a bright guy, I know he is very aware of the situation. He knows that not only does he have to play well, there has to be production on his part.

"I'm sure he is aware that he is getting a second, third, fourth, fifth, sixth chance because of our personnel situation. He has to get it done."

There is also heat on the Canucks' defencemen (minus Christian Ehrhoff especially) to start putting up points. It's not necessarily scoring goals, as most team blocks shots like a bunch of kamikaze's nowadays, but to put up assists. Sami Salo risked a potential mouth injury by saying:

"Look at Ryan Johnson. Try to get the puck through him. He throws his head at the puck and those guys [shot-blockers] are the best penalty killers. They sacrifice their bodies -- and I'm not saying they didn't 10 years ago, but it's way more now. If you don't have a shooting lane, you have to shoot the puck short side and that's what we've been doing."

Still though, Sami, you have 20 shots and 2 assists in 14 games played. We need more!

-The Canucks have scored 60 goals this season. The D have contributed 8 to that cause. That's 13.3%

-The defence has contributed 27.9% of the Canucks total points scored.

Last season the defence accounted for:

Wait a minute...unless my math is off, those numbers are not so far off comparatively. Damn it forwards! Get your shit together!

***Just to throw this out there...some of us like to predict the score of the games here. So I was thinking that we should continue that trend. I'll make a little section on the left sidebar with a leaderboard to see who has the best Nostradamus skills as the year goes along. Bragging rights. Are you in? Keep in mind that nobody gets to pick the same score.