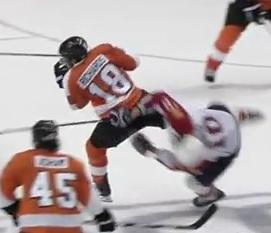 Continuing on with trying to entertain Canucks fans during the long layoff, I've decided to think outside the Nucks box.

I have no shame in admitting that I am a fan of old school hockey. Head shots are not a new phenomenon in the NHL and beyond. It has been going on for years, as Mike Milbury pointed out on CBC's Satellite Hotstove last Saturday night. He is correct. Watch a Scott Stevens hit highlight reel as one example and you can see that also. In the old days, and very rarely today, players would take a head shot and scramble in 10 different directions trying to get to the bench because they got their bell rung. That was the "manly" thing to do. I've always respected that. Nowadays, with all the concussion issues, precautionary procedures by team doctors (stretchers and the like) and change of protective gear (which I'll get more into later), players get smoked and lay on the ice motionless, whether because they are knocked out cold, or are playing it safe.

While I still think the elbowing/charging rules are good ones, I don't want the NHL to change the rules now involving shoulder shots to the head. In a game filled with fast and size-able players, hits in all forms can happen in an instant. I don't want this cloud of fear hanging over aggressive player's heads that they cannot hit someone for fear that they might make contact with the opposing player's head and thus be disciplined for it. I have so many reasons for feeling this way.

-It's f**king hockey! I love hits! Clean hits! Shoulder-to-the-head included, if that comes to pass.

-The various heights of players. Guys like Chris Pronger or Zdeno Chara decking a shorter player (or, like Scott Stevens smoking Paul Kariya for example) are going to lead to a head shot based on that. So these guys need to change their game now to avoid it? Give me a break. The OHL is always "leading the way" with potential new NHL rules, but you can hear the sentiments of Mike Kelly, then coach of the Mississauga Ice Dog's opinion of bigger players hitting less in this clip. "Then that 6'4" defenceman has to avoid the check" he says. I don't think so!

Allow me to be a little bit random by showing some clips.

A. Cutting in the middle

B. Admiring his pass

A. Reaching for the puck with Weight coming at him.

B. Weight may have been trying to make a shoulder-to-shoulder blow but it was too late to react after Sutter leans forward. How is the NHL going to ban head shots when this kind of thing happens? Video review to decipher whether or not the hit was clean? Or does he get a game misconduct immediately? The latter is horse shit.

Liambas is suspended for the entire season.

A. Fanelli shouldn't be turning his back there. Not along the boards like that. Hate to see him hurt that badly though. B. Can the NHL/OHL or whoever put some more slack in the boards/glass? It was like Fanelli hit a brick wall. No give in that glass. I see his helmet popped off too.

So, randomness and disturbing images aside, I stand by my point. I don't think head shots should be eliminated. What I think should be changed is:

1. Player awareness on the ice. Who's out there for the opposing team? Don't cut in the middle. Don't admire your passes. Don't turn your back along the boards when an opposing player is coming at you.

2. Every arena should have more flexible glass. Remember how it was in the Forum in Los Angeles? Yeah, just like that.

3. Here is a real biggy that Don Cherry alluded to years ago, and I still think holds true to today:

Get rid of the hard plastic elbow/shoulder pads. 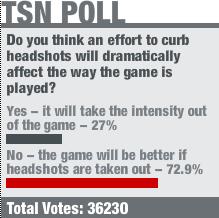 I see that I represent a minority on this issue. I don't care. That's kind of a bogus poll in the wording of it. Like I said before, it does change how a player who is over 6'4" plays his game. He should not be subjected to that.

The intensity and physicality of the game will be somewhat compromised. Great players like Mike Richards will have their game suffer as a result. It's a game of seconds or less when it comes to hits. Head shots happen, whether intentionally or not and whether the League tries to stop it or not.

I'd get into the instigator rule and players "policing" this kind of thing, but I don't need to. I'm old school. Figure it out.

I could go on about this all day. Opinions?