10 Things To Do While Waiting For Vancouver To Play Again

Share All sharing options for: 10 Things To Do While Waiting For Vancouver To Play Again

10. Fondly relive the magic and the legend that was Mikko Jokela's time with Vancouver.

9. Go to the Province or the Sun and see if you can find the most inane, off-base comment from the past week or two. For instance, here's a thoughtful submission courtesy of "FireGillis":

Gillis' big mistake this summer was handing the worst contract in NHL HISTORY to the italian.

(ed note: As an Italian I am proud to say - we're finally #1 at something)

8. Pick a player from the existing roster, or a member of management, and why he should play which character in Star Wars (episodes IV-VI, don't bother with the others). And suffice it to say Mike Gillis gets to be the emperor. Princess Leia? Probably best to keep that one to yourself.

7. Figure out why Sami Salo isn't smiling here. Or explain why Mattias' game trumps that of Sami's.

6. Help Mike Gillis find another aging Swedish diva to chase. Any name will do, from Carl Abrahamsson to Lars-Erik Esbjörs to Eilert Määttä to even Ulf Thors. The more diacritic marks over vowels the better. Explain why he'd be a good member for the top six. Show your work.

5. Three words: Pavol Demitra Operation. Fun for the whole family probably no one. 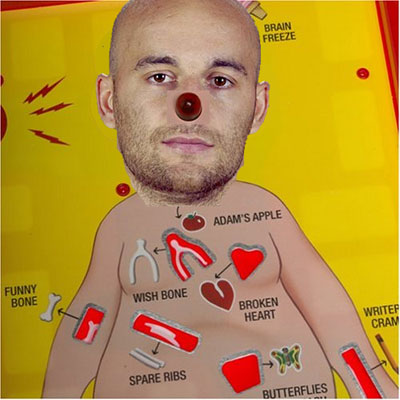 4. "Dump and chase" is a boring phrase. Help make AV feel better about his offensive strategery by coming up with another name. Make it sound impressive, like "Offensive Thrust" or "Aggressive Vision". How about "It Never Works"...wait, not that.

3. Create another Kyle Wellwood Twitter trending topic. Bonus points if you can weave in lack of scoring, soccer injuries, $1,200,000 and Fudgie the Whale. Gold star if you can actually bring Twitter down so we can say Wellwood forced the Fail Whale on humanity.

2. Using a space gun (or Project Harp which, if you're a conspiracy nut, is a means to control weather), pick only one of the following NHL players to fire into the exosphere: Chris Pronger, Zack Stortini, Steve Ott, Cal Clutterbuck, Sean Avery, Dion Phaneuf or Dustin Byfuglien. And, yes of course, Pierre McGuire is an acceptable substitution.

1. It's only a matter of time before Shane O'Brien slips up to the press about his icetime so help our 7th defenseman with a more colorful script, Mad Libs style. Use his rant from March as practice: