Share All sharing options for: Beware Of The Canuck Killer: Canucks-Avalanche Preview 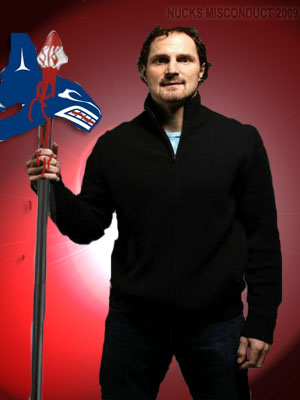 The Province put out an article called "Canuck Killer On The Loose" on April 1, 2008. At that time, Milan Hejduk, who began his career in 1998, had scored 32 goals in 54 games in his career against Vancouver. 9 of those goals were game winners. That was and still is more than Joe Sakic or even Jarome Iginla have scored against us. I decided to dig into his stats a little further, but could only start at the 2001-02 season, as that was how far back Hejduk's game-to-game stats would go on ESPN's site.

Since that season, Hejduk has played 46 games against the Canucks. He has scored 23 goals, 19 assists and 42 points. The Avalanche have a 25-19-2 record against us since then. Colorado won 13 of the games where Hejduk scored a goal. They have won 18 of the games where he registered at least a point. Since that Province article came out, Hejduk has 2 goals and 5 assists in 8 games against Vancouver. Canuck killer indeed.

So why all this Hedgeduck talk? Well, barring him getting hit by a bus or an errant Canuck fan's bullet, he should make his return to the Avalanche lineup tonight after missing 2 games with a sore back. Colorado lost both games in his absence.

The Avs could see the debut of Tom (Not-So Discount) Preissing as well. TJ Galiardi, Ruslan Salei and John-Michael Liles remain out of the lineup.

Coach Joe Sacco is putting the heat on his team, saying Friday:

"We talked briefly after practice and it’s a must-win for us," said Sacco. "It’s a team that’s played well against us. The last time we played them in Vancouver they took it to us. We need to respond with a good effort tomorrow night."

This is the last game of Vancouver's 5-game road trip. They are currently 1-3. After this game, they travel home for a 5-day layoff and will meet the Avalanche again on the 20th. There should be some bad blood brewing after these 2 games. After the game on the 20th, Vancouver will not play the Avs again until March 9. Thank...god? We'll see.

Craig Anderson will start in goal for the Avs. Despite 2 setbacks against the Oilers and Canucks recently, his stats are still super, as is his play. Concerning for Canucks fans, as Van can't score! You never know what will happen though.

-AV looks to use the same lines and line-up tonight:

-Vigneault told The Province that he liked what he saw from Wellwood last game and that, of course, he needs to start scoring.

-Colorado unveiled their new 3rd jersey on Friday and will don them for the first time against the Canucks. Nice-looking uni's I must say, except for the damned clowns wearing them.