Why Can't Vancouver Win On The Road?

Share All sharing options for: Why Can't Vancouver Win On The Road?

Vancouver is a laughable 3-7 on the road. Their last four away games (Anaheim, Minnesota, Dallas and St. Louis) were all match-up's against slumping teams and three of the opponents (Anaheim, Dallas and St. Louis) responded by blowing up Vancouver. Dallas didn't dominate on the scoreboard as much as they dominated the game's shot quality and time of possession. Regardless, poor Cory Schneider never had a prayer.

So what gives? They couldn't win at home last year and now they can't win on the road? There's no chance they'll survive their epic travel schedule bookending the Olympics if they can't right some of these wrongs soon. And of course we can fault the injuries for some of this, but Luongo or Daniel themselves can't atone for the failure of an entire NHL roster.

I wanted to look at some of the trends with these road games, see if anything jumped out at me. But with all the injuries, defensemen playing as forwards, etc., it makes it a bit tougher to look at the individual level. Plus I'm too fucking angry at what was a completely embarrassing performance last evening (seriously, every player plus AV should have trouble looking in the mirror today). So I pulled together some basic numbers for every road game Vancouver has played so far. If you're interested, you can download and muck around with them. It's a small sample obviously but on the face of it here are the trends: 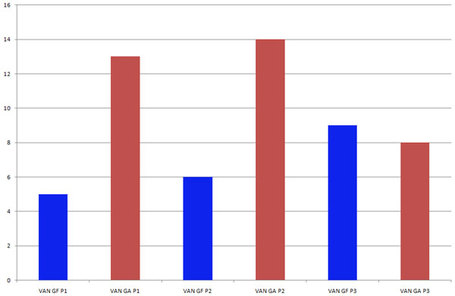 The graph above shows a break down of goals per period for Vancouver and their respective opponents while on the road. Vancouver's first period totals are abysmal (5GF, 13GA), the second is no better (6GF, 14GA) and the third they finally get on the right side (9GF, 8GA). We've all said it before and it pains me to repeat that the Canucks just love to start slow. They never come out in the first period and produce. They get their killer instinct later in the game. That doesn't mean they don't play well, it just means their system - for whatever reason - sucks in the first 20 minutes. In six of the road games Vancouver has given up the first goal and only once - the Chicago game - did they come back to win. 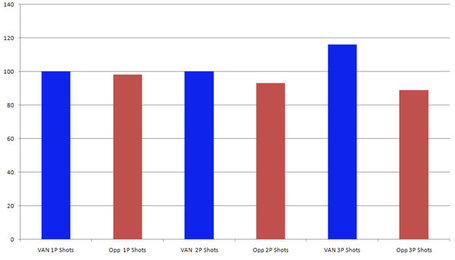 Vancouver has the same shots over the first two periods (100) while limiting their opponents to 98 and 93 respectively. In the third the differential widens to 116 SOG for Vancouver and 89 for their opponent. That stands to reason: in the majority of these games Vancouver is throwing everything but the kitchen sink at the opposing netminder while the opposition is trying to hold the lead.

During the third period of the 7-2 joke loss to Anaheim, the Canucks had 22 shots to the Ducks 12, but Anaheim still scored three goals that period while Vancouver added none. So while it was nice to hear Vancouver was outshooting their opponents very early on in the season, it doesn't mean they are quality chances. I didn't have time to look into the types of shots and what situations they were taken in, so there's more to be explored here (check out some of Gabe's work on shooting with the lead and shots by game state if you're interested).

I'm not convinced quantity beats quality in this respect; the defense loves taking a great deal of shots from poor angles and the forwards (Bernier and Sammy spring to mind) often take an outside shot rather than risk skating in a bit more for a better angle and/or another passing lane. Conversely, maybe our defense gives away too many quality chances in high percentage areas (in the slot, down low, when the goalie is sleeping, etc). Something needs to explain why the shots are coming, but the goals (as evident above) are not. Is it because of penalties? 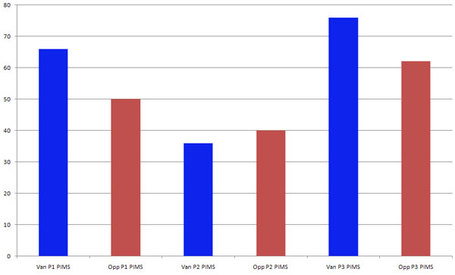 If you're like me, you looked at this chart and sighed deeply. All of those Sedin interference calls. The Bieksa mistakes. The "oops!" delay of game type calls. Those certainly add up. To be fair, the third period numbers for Vancouver (76) and the opposition (62) are skewed badly because Vancouver lost their composure at the end of the Blues game. So if we ignore the PIMs from the third period of last night's game, we get this: 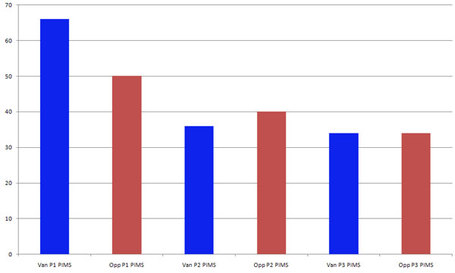 Looks a bit better, but also underscores their lack of discipline. The Canucks are the 6th highest penalized team in the league. They have three of the top ten most penalized defenseman in the game, including Bieksa who leads the league (wrestling that title away from last year's PIM D champion SOB who is fifth!). Amazingly, Vancouver has only surrendered three PP goals in their PIM-happy first periods and two of those were from Calgary in the season opener. But it begs the bigger question of why are they so heavily penalized, particularly in the first period? Is it because of the injuries, adjusting to new linemates and the poor decisions that are made as a result? I don't know.

In regards to the losses to Anaheim, Dallas and St. Louis, it sure seems that starting a road game with a far greater emphasis on getting the lead with disciplined play wouldn't be a bad idea to try. Maybe a seminar on quality chances and better shot decision is in order (call Gretzky, I think he's free). Or, if that's out of the question, than AV needs to drill into their heads to play like they are always behind by one goal since they seem to tighten up in those circumstances.

And if all of this is out of the question, than may I suggest simply forfeiting? You'll save your paying fans a great deal of anguish to not watch 60 minutes when your own players aren't interested in showing up for the first ten.