A Night For Revenge And Hate: Canucks-Blues Preview

Share All sharing options for: A Night For Revenge And Hate: Canucks-Blues Preview 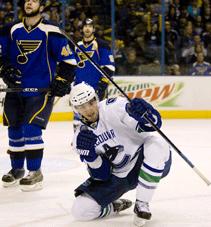 UPDATE: 10:14 AM PST: Cory Schneider has been sent down to the Moose today. Big glove tap to Missy for ever being the info maestro

It has been a long tiresome day and I'm feeling ornery right now. With this crankiness comes honesty and hatred. So here it goes:

I hate the Blues! Almost always have, probably always will. I think I know why. It's mostly because of Brett Hull. I don't care that he was inducted into the Hall of Fame tonight, I can't stand him. I skipped his induction speech and read the obituaries instead, wishing he was on the list. Despite all his sick skills and accomplishments, I hated many of his quotes, his ego, which organizations he was a part of (Flames, Blues, Red Wings and Stars), oh and that infamous skate in the crease while scoring the Cup-winning goal against the Sabres. No love. Just one of those guys. Kind of like Jeremy Roenick in his latter years.

Two hard-fought series between the Canucks in Blues in 2003 and 2009 increase the animosity and rivalry as well. But I'll get to that later.

There are so many other Blues I've detested over the past several years: Al MacInnis, Chris Pronger, Pierre Turgeon, Martin Rucinsky, Craig Janney, Petr Nedved, Doug Weight, Ladislav Nagy, Pavol Demitra (yes that's right), Craig MacTavish, Paul Kariya, Keith Tkachuk, Eric Weinrich, Barrett Jackman, and several others. I know one guy (out of several others) who gets a pass though:

Yeah, that guy is cool.

What better chance for St. Louis to snap out of their 5-game losing streak than to play against the team that handed them their asses in Round 1 of last year's playoffs? You know that their motivation is going to be terribly high tonight with retribution on their minds. They have to start scoring more goals though. They have been out-scored 13-4 in their current losing streak (2 of those were shootout losses). It seems to be the Blues' general problem. Take a look down their team scoring leaders list and you can see why they are ranked 27th in the NHL in goals per game average. On a positive note, for them, they rank 8th best in the NHL in goals against, one spot ahead of Vancouver. The goaltending stats from Chris Mason (2.45 GAA and .920 save %) and Ty Conklin (2.24 GAA and .928 save %) are not too shabby.

Andy McDonald and Barrett Jackman returned to their lineup last game. The Blues had a 2-0 lead over the Thrashers and managed to lose 3-2. It's just a matter of time before this team turns it around.

But why be nice? Here are some of my favorite Blues memories in recent years:

1. OK, let's go a little further back in time to March 5, 1991, where then-Canucks GM Pat Quinn rapes St. Louis by trading Dan Quinn and Garth Butcher to the Blues for Geoff Courtnall, Cliff Ronning, Sergio Momesso, Robert Dirk and futures. How did Dan work out for ya? Ah, not so good. The same year, the Blues trade Quinn and Rod Brind'amour to Philly for Ron Sutter and Murray Baron. That Pat Quinn trade laid the foundation for the Canucks' 1994 march to the Finals.

Is there something wrong with Rick Rypien's hand(s)? I wanna see him fight someone. It's been several games now. A serious test for him would be against Cam Janssen. That guy is a beast. Here's hoping it happens.

There is no love between these 2 teams. This is a game you don't want to miss.