Happy Holiday: We're The Worst Fans In The NHL

Share All sharing options for: Happy Holiday: We're The Worst Fans In The NHL 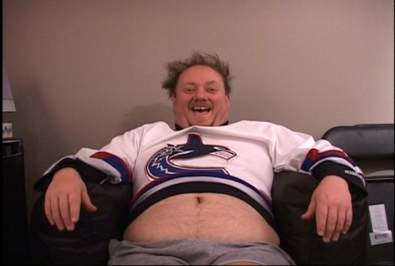 Before you jump headlong into your Thanksgiving weekend, let's talk about the recent Spike TV blog that says not only are the Canucks one of the top ten teams (#5 in fact) with the most annoying fans, but since Montreal is at #9, that makes us the worst in the NHL. At long last, we're the best at something!

And to be ranked as such from a channel that shows basically nothing other than enlightening police car chase videos and UFC is certainly nothing to be scoffed at.

A lot of you know my deal: I ain't from the city nor am I celebrating a holiday this weekend...unless being happy pumpkin ale is finally widely accessible is permission to celebrate? I'm just another jackass blogger in another basement (yo Ma! Meatloaf!). Even Sean isn't technically from Vancouver but he could probably chime in with something more genuine than I can, that is if he wasn't fighting off bears on whatever trip he's on.

Part of me is fine with being labeled the most irritating. So be it. Hell we should be proud of it, promote it on shirts or those flags on all the cars. Give this girl her own TV show. Have special annoying lattes. Between periods Fin can trip opposing fans down the stairs and then the goal horn sounds. I don't know, it's marketing fodder during a recession, what's not to like?

The other part of me can't help think about those who inform the greater Vancouver area about the Canucks (not those of you good looking people reading this here web site or a number of other quality ones). Not all of the writers and reporters obviously. But, as they say, the squeaky wheel...

Take Mr. Gallagher for example. When he's not busy bemoaning successful teams or harboring conspiracy theories or suggesting other teams are tampering with our defense (sheesh, there's that "T" word again) or when his own paper isn't planning parade routes or trading Luongo for God's sake, he offers the following:

Before Wednesday's win over the remarkably-sad Montreal Canadiens, we in the media were being admonished by some in the playing ranks to take a deep breath and relax with respect to the slow start.

And based on the fact just three games had been played, there was considerable logic to the argument given there were just 79 more to go at the time. But there's a whole new way of actually looking at it and even after the first two points of the season have finally been wrung up, this team could very quickly find itself in deep doo-doo if they plan on winning the Northwest division.

Captain positive explains that, because Vancouver plays only two games in the next seven days, it's possible they could behind Calgary for the NW lead by as much as 14 points by next week. And, if that happens, then the Canucks may as well go golfing now. I'm curious if Vancouver was 4-0 right now and Calgary was undefeated by next Friday, if then being at a two or four point differential would have still caused such angst. Probably, because being miserable is something he excels at.

And the radio? Though I don't listen anymore, I never had a problem with Bmac and Rintoul (the 'little buddy' schtick thing was old after one use). Blake Price seems fine for the most part. But - I know you know where I'm going with this - Pratt alone sinks the station. Sift through his blog for a sampling of the wit though if you give up after ONE ENTIRE CAPITAL LETTER SENTENCE I CAN'T BLAME YOU.

Maybe pointing the finger at the media is a cheap way out. Perhaps it's just time to accept that for whatever social, cultural or economic reasons Vancouver fans are in a league all to themselves.

Or maybe you, like me, could care less about what one blog post says. Besides, this guy said we're one of the best and there was nothing wrong at all with his assessment. Um, yeaaaah...

Anyway, have your say then get outside and enjoy your holiday folks.